I started playing Wasteland 2 last year and got about half way through the story when they announced the Director's Cut edition, at which point I lost some free time and decided to leave it until the DC was out and stable. So here we are.

Wasteland 2 is a modern incarnation of the classic RPG formula. There's a lot of text, a lot of detail and it can be pretty heavy going. It can also be rewarding and the details ooze personality. This might make you think "Fallout", and, obviously it's a similar sort of setting, but Wasteland's world is a bit more superficially grounded by virtue of not having the 1950s wackiness strewn around. The overarching story itself is, in RPG tradition, largely uninteresting and lacking any sense of urgency, but there's plenty of settlements in the wastes full of people and plots to keep you interested, and despite Wasteland's outwardly serious demeanour, some of them are completely off the wall. 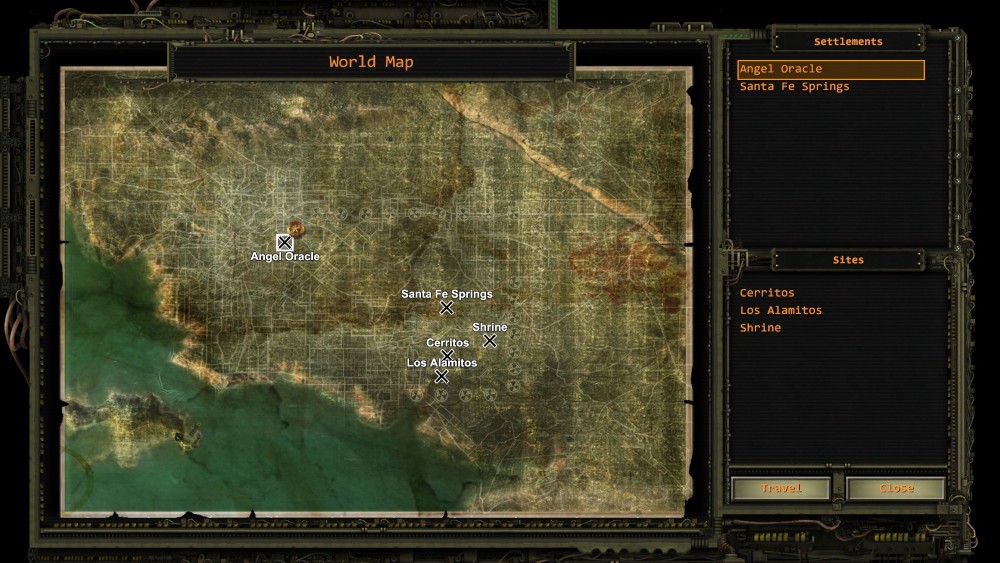 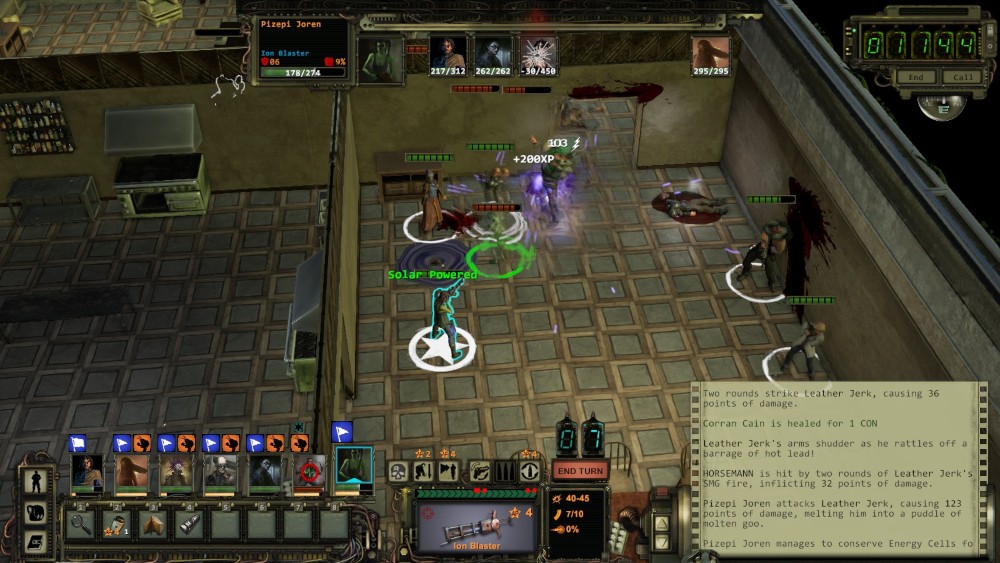 The player takes control of a military-ish squad (of the Desert Rangers) and has full control over them, rather than playing as a lone warrior who picks up independently minded NPCs who run in front of your crosshairs at integral times. This is possibly a barrier to getting interested in the game early on, as although you can have up to three NPCs in your party who will add their own comments occasionally, the four core members of the squad you start off with are entirely player made (or chosen from a preset) and don't have any dialog or interactions associated with them. Ok, never mind, it picks up soon.

Character creation and progression follows a familiar format consisting of attributes, skill points and perks. The skills system generally works very well by being thoughtfully coupled with the gameplay. There are often more ways to solve a problem than simply shooting everyone causing it. Sometimes you don't have the skills or foresight you need to resolve a situation to your satisfaction, but the game handles the branching well. If you end up with a sub-optimal outcome, and you will occasionally because your actions do not always have predictable outcomes, then that's just life - maybe you'll do better next play through. The game really demands a second play through just to see the alternative possibilities. The breadth of this hits you very early on: the first decision you make is to respond to one of two distress calls. Each represents a large chunk of content and gives access to a different NPC companion, but you can't do both.

The only obvious criticism of the skills system is that they are a bit diluted by there being too many of them. For example there are essentially four different door opening skills: lockpick, safe cracking, computer science (electronic locks) and brute force, which seems a bit excessive. 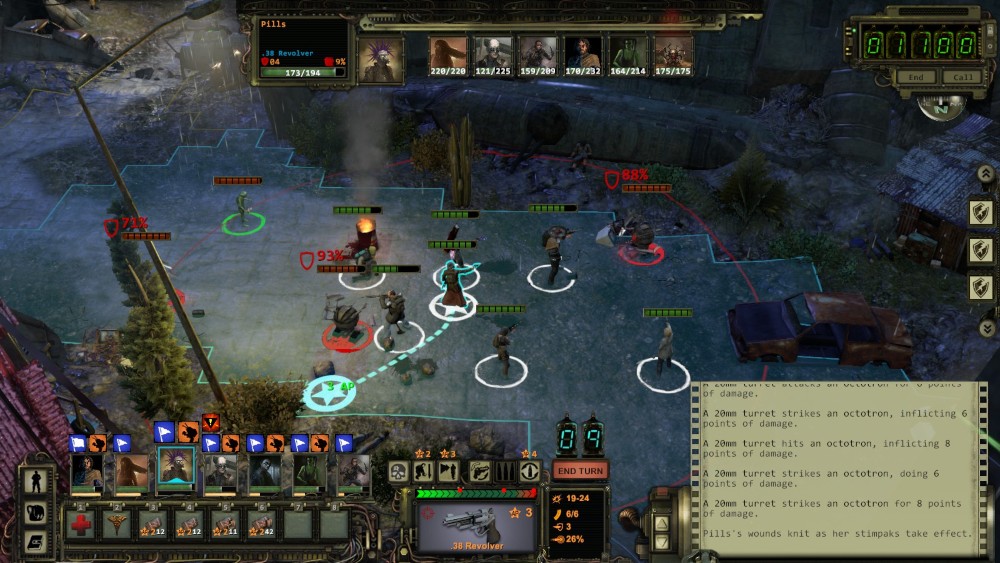 The combat itself is OK, but could be better. It's deeper than Fallout 2, but shallower than Fallout Tactics. Tactics is a dirty word with fans who wanted an RPG, but people unfairly overlook that it was a really good tactical turn based combat game. W2's combat is not bad, but it can be a bit algorithmic in that environments and enemy behaviour are not varied all that much. Once combat starts there aren't any surprises - everyone in the engagement is immediately visible to everyone else regardless of where they are and the AI knows exactly where your squad is regardless of whether anyone has line of sight on them, so you rarely need to change tactics away from getting everyone spread out and behind some cover for an evasion and chance to hit bonus, and have your sniper take a pot shot to initiate the fight. Later on in the game enemies do start packing so many hit points that you do sometimes need to think about using targeted shots to hurt their arms to cripple their aim, or slow them down by hitting their legs, but for the first half, tactics can be pretty simple. Weapon jams, intimidation effects and minimum effect ranges on some classes of weapons make things a bit more interesting, but overall some of Fallout Tactics' combat features could have been used to much stronger effect here. 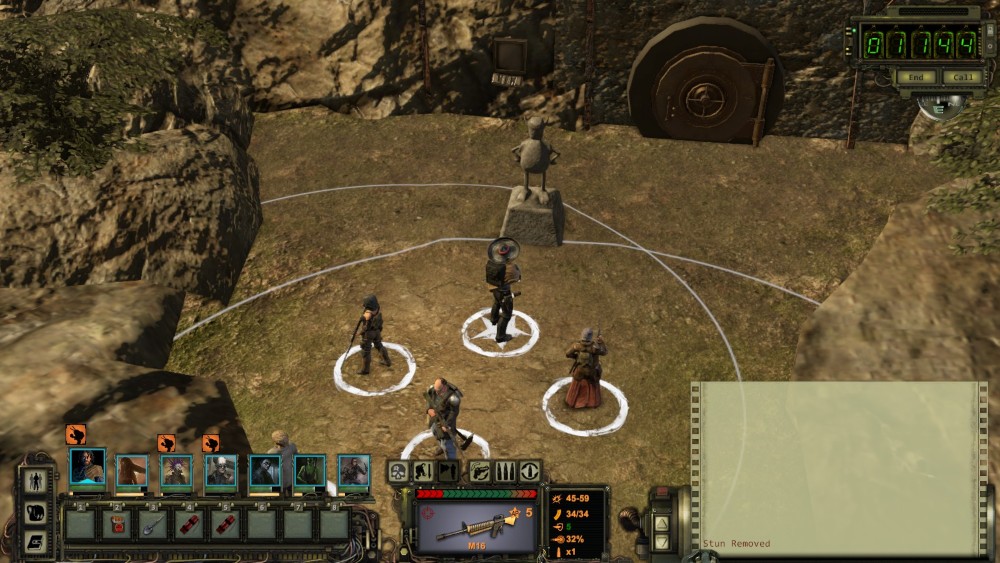 Weapons are diverse and offer a satisfying progression of stopping power as the game goes on, but they are somewhat unbalanced, i.e. assault rifles and sniper rifles are the main work-horses, and shotguns are virtually useless. Handguns don't become competitive until you get the 9mm variants. SMGs and heavy weapons exist in the hands of enemies but eat too much ammunition to make them particularly tempting to the player (although you might occasionally use burst mode of your assault rifle in a tricky fight). The game advises you to vary your weapon skills so your squad isn't fighting over ammunition, but ammunition isn't that sparse, and given another play through I'd just give everyone points in assault rifles or sniper rifles. Fallouters will be pleased to know, however, that rushing up to someone and hitting them over the head with something heavy is a mostly viable strategy, but is neutered somewhat by the fact that heavy armour has serious drawbacks.

Overall: Wasteland 2 has a pretty long list of minor flaws, but none of them are serious enough to take away from the fact that the game is engaging and continually tempts the player to poke around, meet people, and learn more about the world. The bottom line is that if you're a CRPG fan you'll probably like Wasteland 2. If you're not, you'll probably find it long winded and lose interest.