It's a surprising revelation if you ever delve into a certain era of PC Gaming that games back then actually were really complicated, far more so than now. It's striking. One such game is Railroad Tycoon 3. You'd be forgiven for thinking that Railroad Tycoon has all the ingredients of a boring game. Nuh-uh. It's not. It's not a Reverend Lovejoy model railway simulator - RT3 is a strategy/management game with a focus on economy and trade (trains are an incidental detail) and is every bit as engaging as games like Civilization (but with fewer tanks). 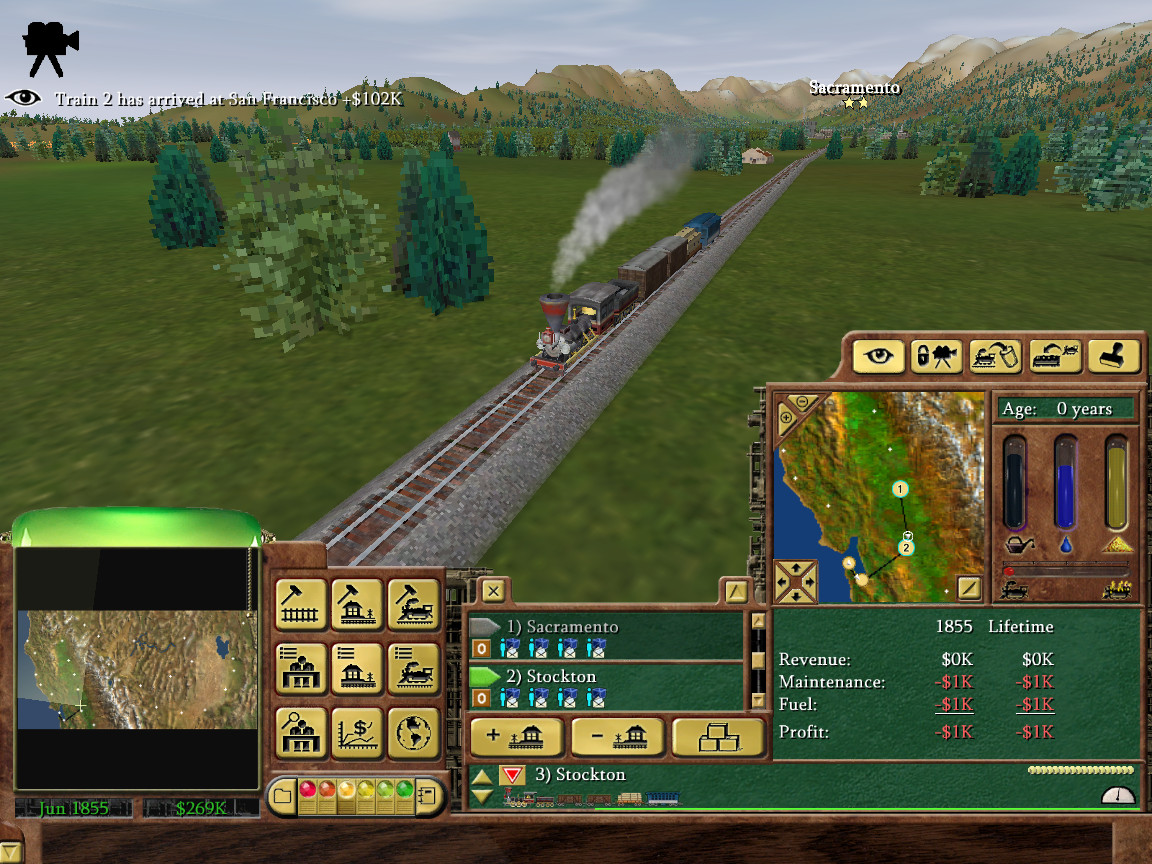 RT3 places you as a Railroad owner (Robber Baron) in the 1800s through to the present day and has you build up a railway network from scratch. Different scenarios have different aims, but generally, you're trying to make money, shift a certain amount of cargo or connect several cities together by a certain date. The game is hard; building infrastructure is expensive and if you don't get things right, your bank balance will plummet as your trains eat money for fuel and maintenance, and you've got no resources left to add more profitable train routes or build new track. And then your shareholders will start getting stroppy. Yes, shareholders, really. How can you keep them happy? Increase the dividends? Drive up the share price out of your own pocket? Some old games offer a staggering amount of rule-detail, and this is one of them.

But the real beauty is that the game's approach to letting you build your empire always has you thinking a few years ahead, "when I've got a bit more money I'll connect up that town..." ... "I'll buy another train to run between Town A and Town B soon...". Grizzled strategy gamers will instantly recognise this as "just one more turn" syndrome.

And I couldn't write about RT3 without mentioning the music; perfectly fitting country and bluesy guitars and harmonicas. It's completely engrossing as you connect up 1800s California to Arizona. Not that the game is limited to America, it also covers the UK and Germany/Prussia nicely.

Note for Steam users on Windows 7: the Steam version is kind of buggy. You'll get a lot of "Failed to find Steam" (restart Steam and try again), and it will often crash at the loading screen with "Railroad Tycoon 3 has stopped working".

You can workaround all of this by going into your Steam/RT3 directory and running "gcwRT3.exe", which seems a lot more stable. It's under C:\Program Files (x86)\Steam\steamapps\common\Railroad Tycoon 3\. I think it bypasses Steam entirely.