I've accidentally conducted a completely unscientific experiment into peat-free carnivorous plant growth over the past 12 months. Unfortunately, 12 months ago I didn't really appreciate that 'peat-free' was significant or controversial so this has unfolded by accident and lacks rigour, but I feel it's still interesting enough to write about. 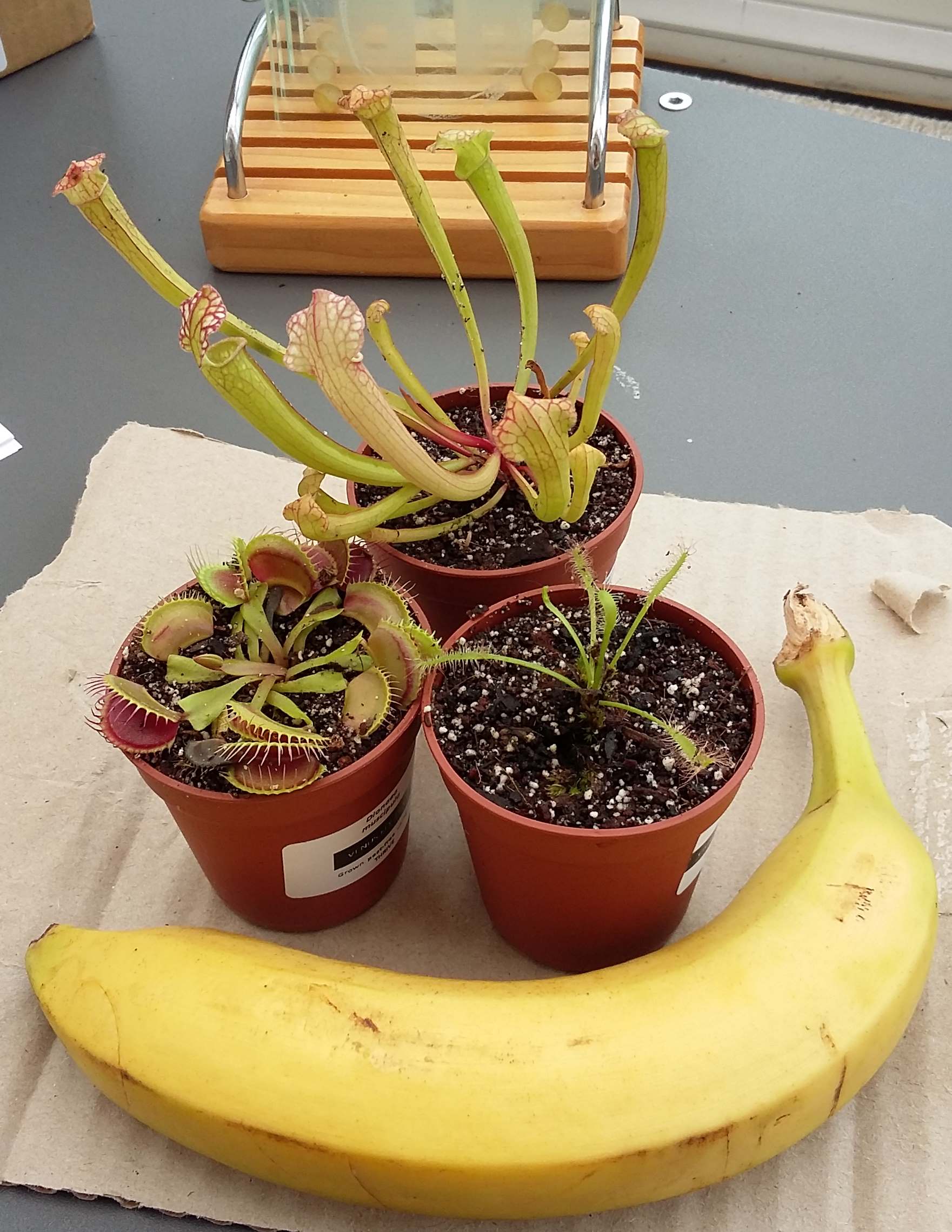 12 months ago - in August 2016 - I bought this set of three carnivorous plants - a Sundew, Venus Fly Trap and Sarracenia - from Ebay and some compost mix from the same seller. It turns out the compost is 'Thrive', which is notable as it brands itself as a peat-free mix suitable for carnivorous plants. The plants actually claim to have been grown in it via a sticker on the pot which reads "grown peat free using Thrive". 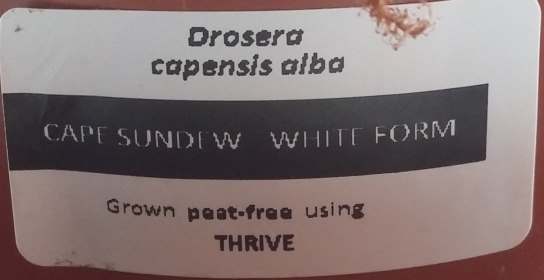 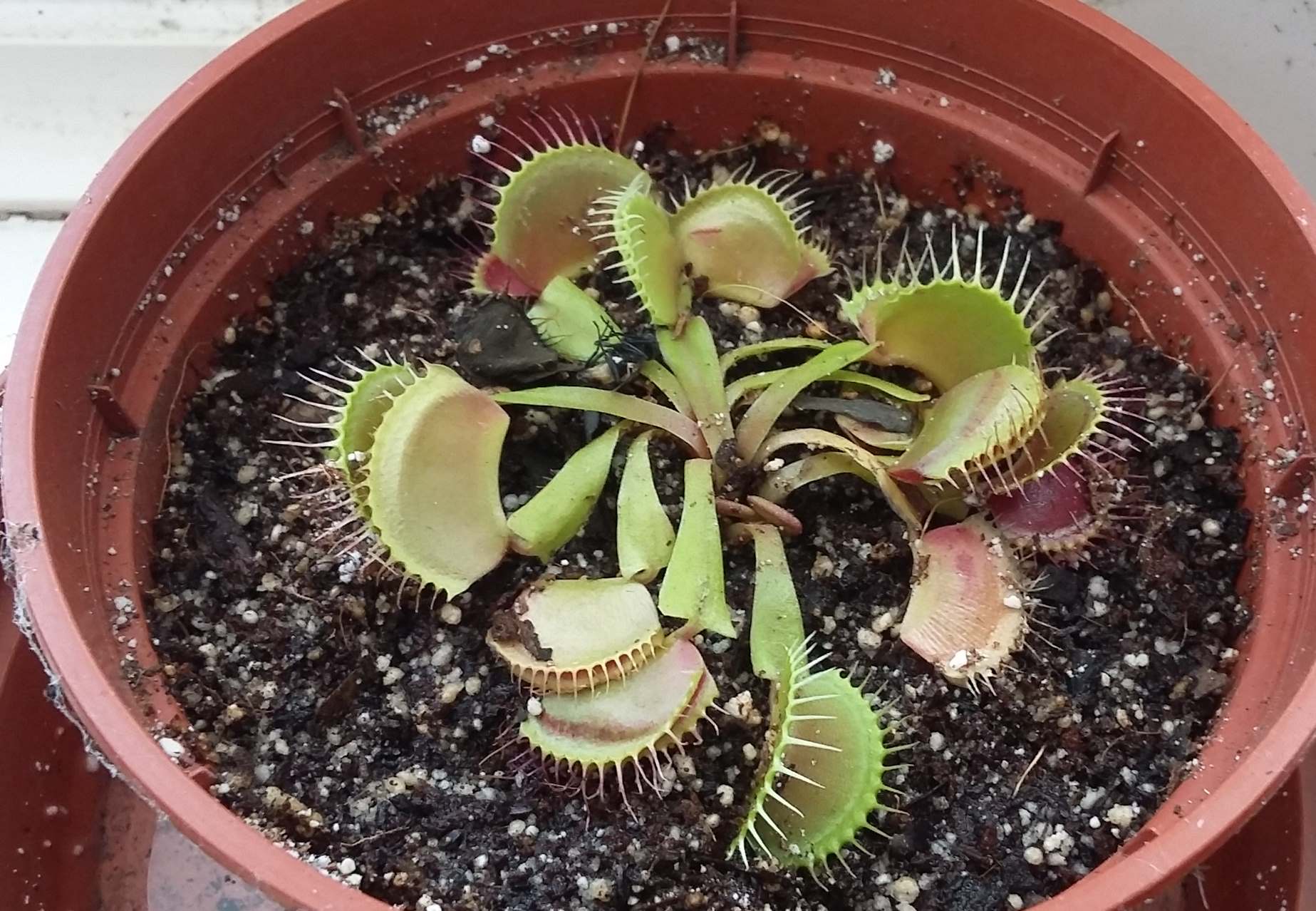 I repotted them all immediately into larger pots, using Thrive. This was unremarkable except I recall the VFT having only a very shallow root system and I wasn't convinced it would survive.

The VFT and the Sarracenia spent winter in an (unheated) conservatory where they underwent around 3 months of dormancy. The Sundew was moved inside and has been growing continually since. In spring, the Sarracenia woke up and started putting up some much larger pitchers. Shortly after, I moved it into a planter outside with a few others. This is where it gets a bit fuzzy - the planter outside is using a peat based mix, but I didn't remove the Thrive from its roots, so around 80% of its roots are still in Thrive. The VFT has had a layer of extra top-soil added because Thrive has a habit of growing bubbly green goo (algae) on the surface, which looks fairly disgusting, but the pot is 99% Thrive. I may have done the same to the Sundew, I don't recall. 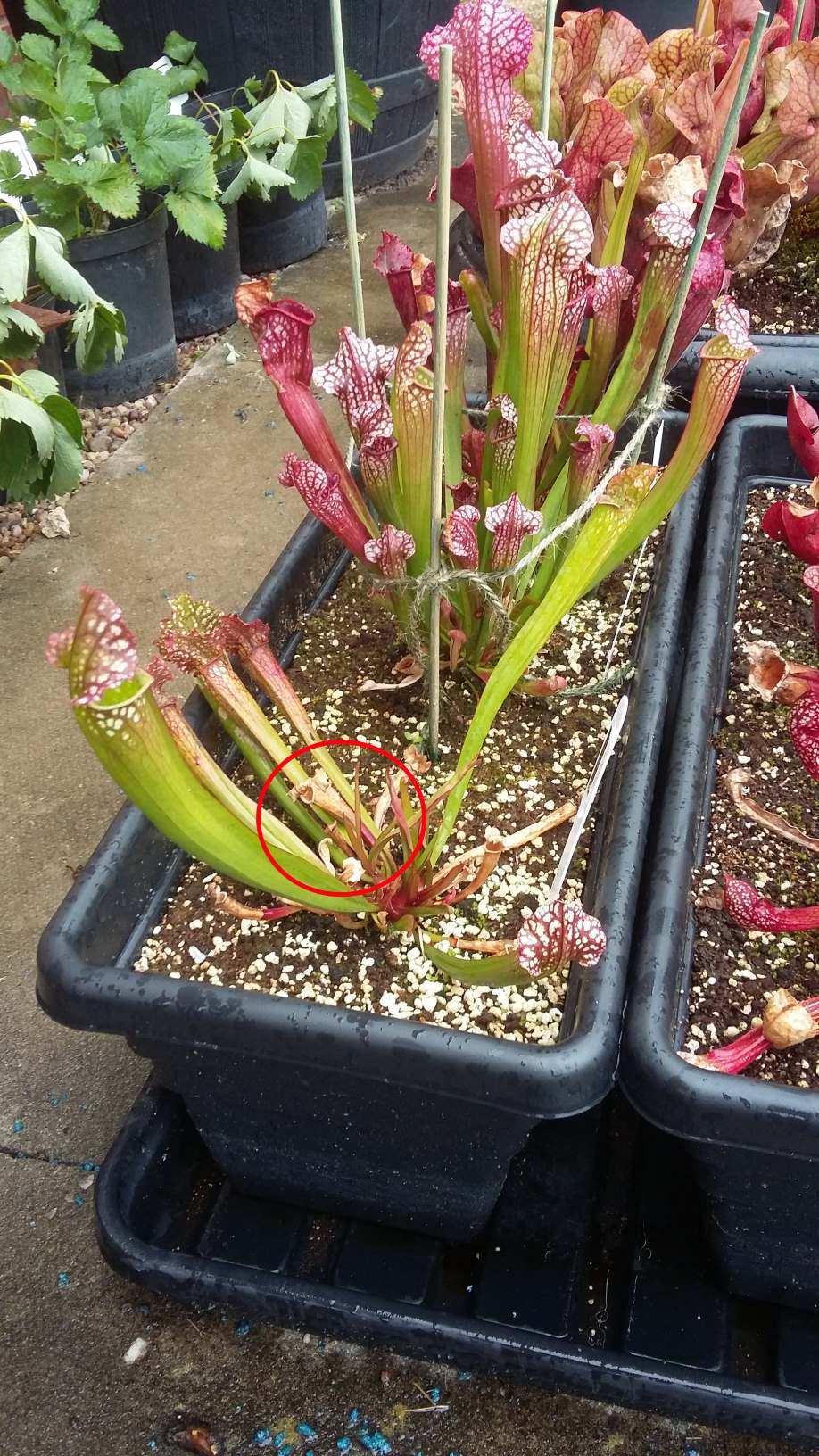 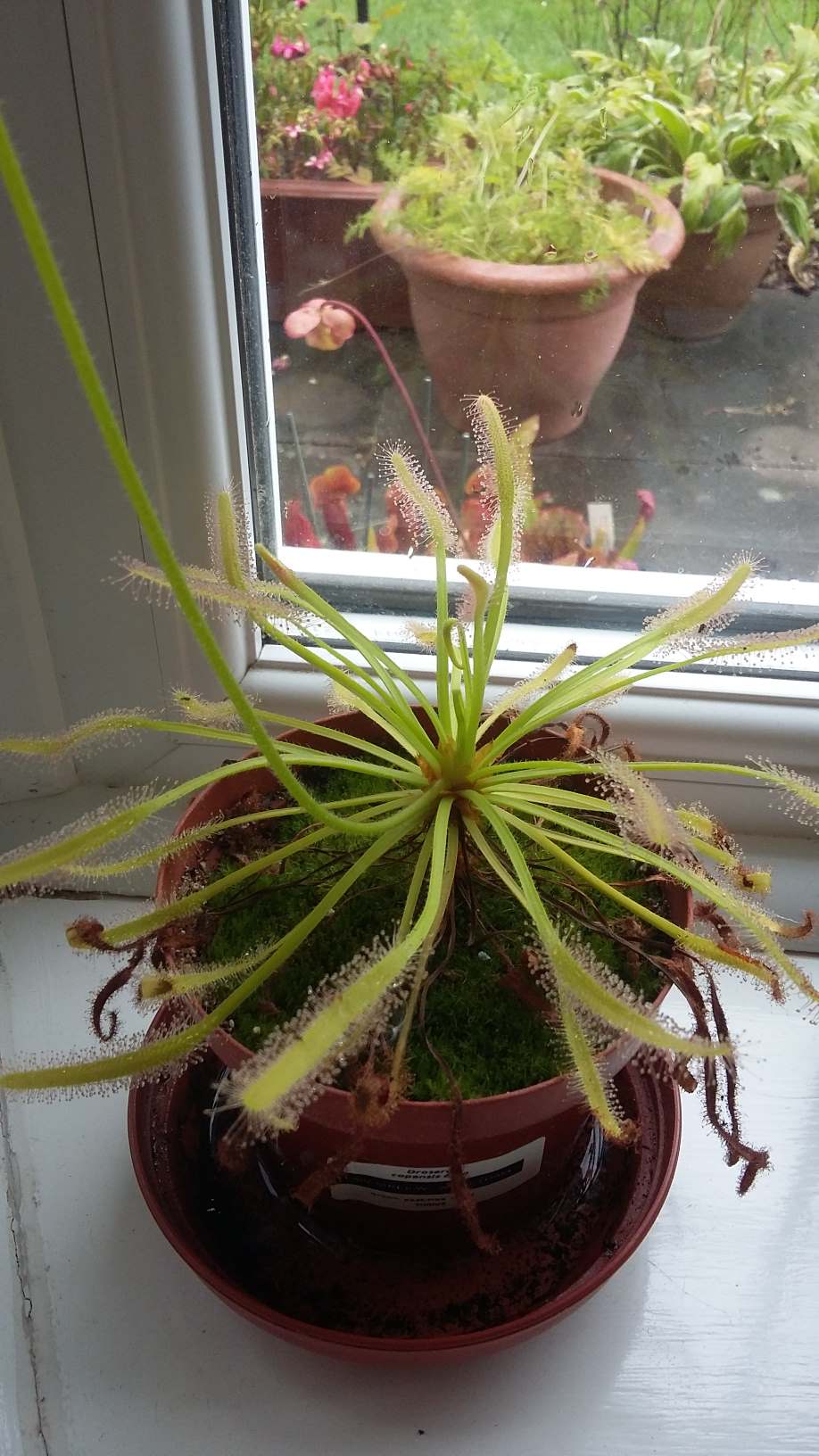 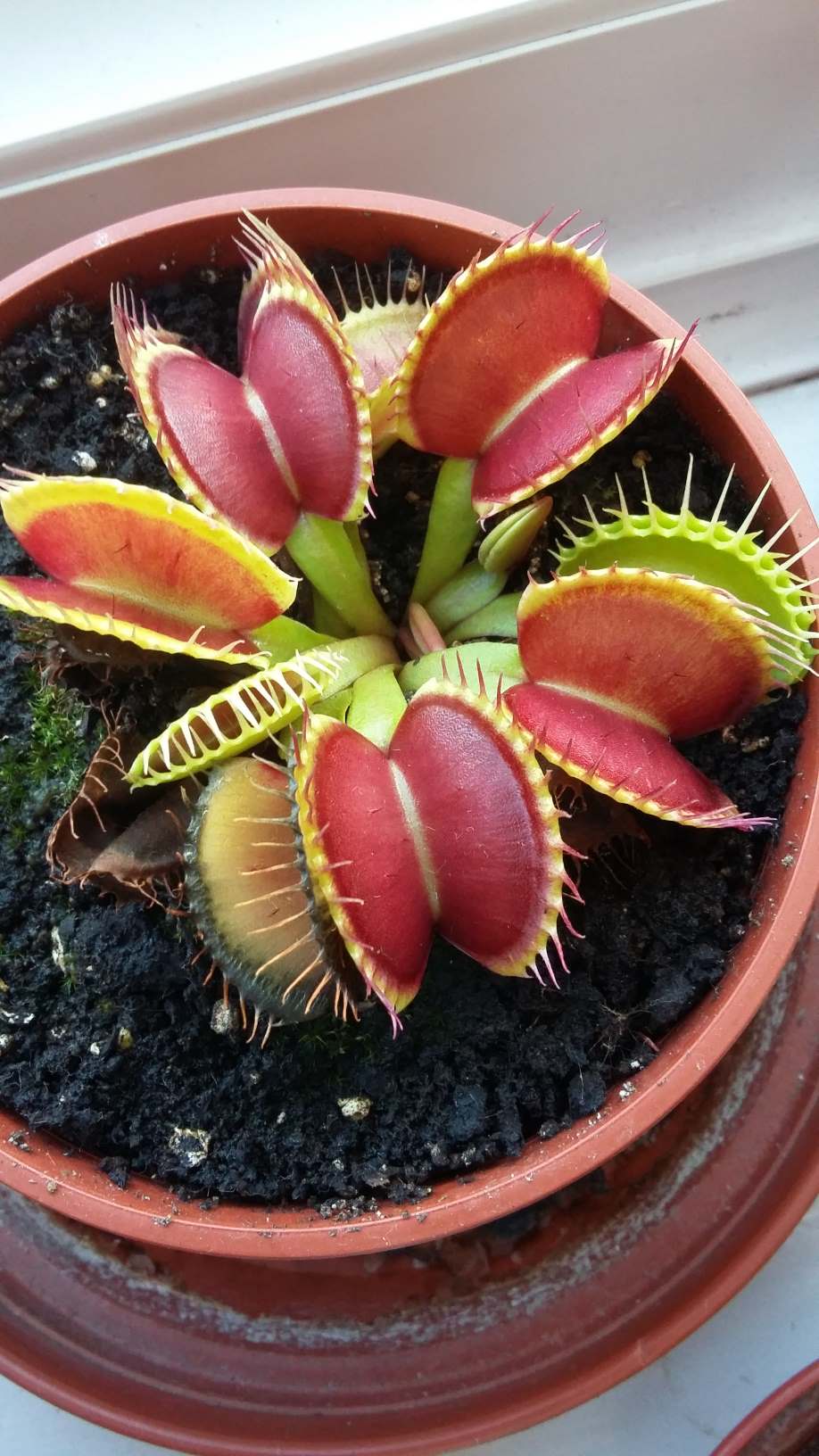 The Sundew and the Sarracenia now are virtually unrecognisable. I've highlighted last year's Sarracenia pitchers which you can compare to the original photo at the top. This year's pitchers are around 3x the size. The VFT's growth has been much less dramatic, but it has grown and it looks great. I'm pleased with the colouration, but I'm more pleased that it's lost the slightly 'spindly' appearance it had when I got it.

Overall the results are great and I'll be happy to continue using Thrive for adult plants.

For seeds, however, it's a different story. In late Spring I planted some VFT seeds (also from Ebay) into three pots: 1 large pot of Thrive, 1 small pot of Thrive, and 1 small pot of peat. Unfortunately, there's no competition; the seedlings in the peat mix are doing well and looking like healthy miniature VFTs, but the seedlings in the thrive pots are really struggling to grow traps and look quite yellow. Interestingly, the small pot (pictured below) of Thrive is doing better than the large pot (although still not great). 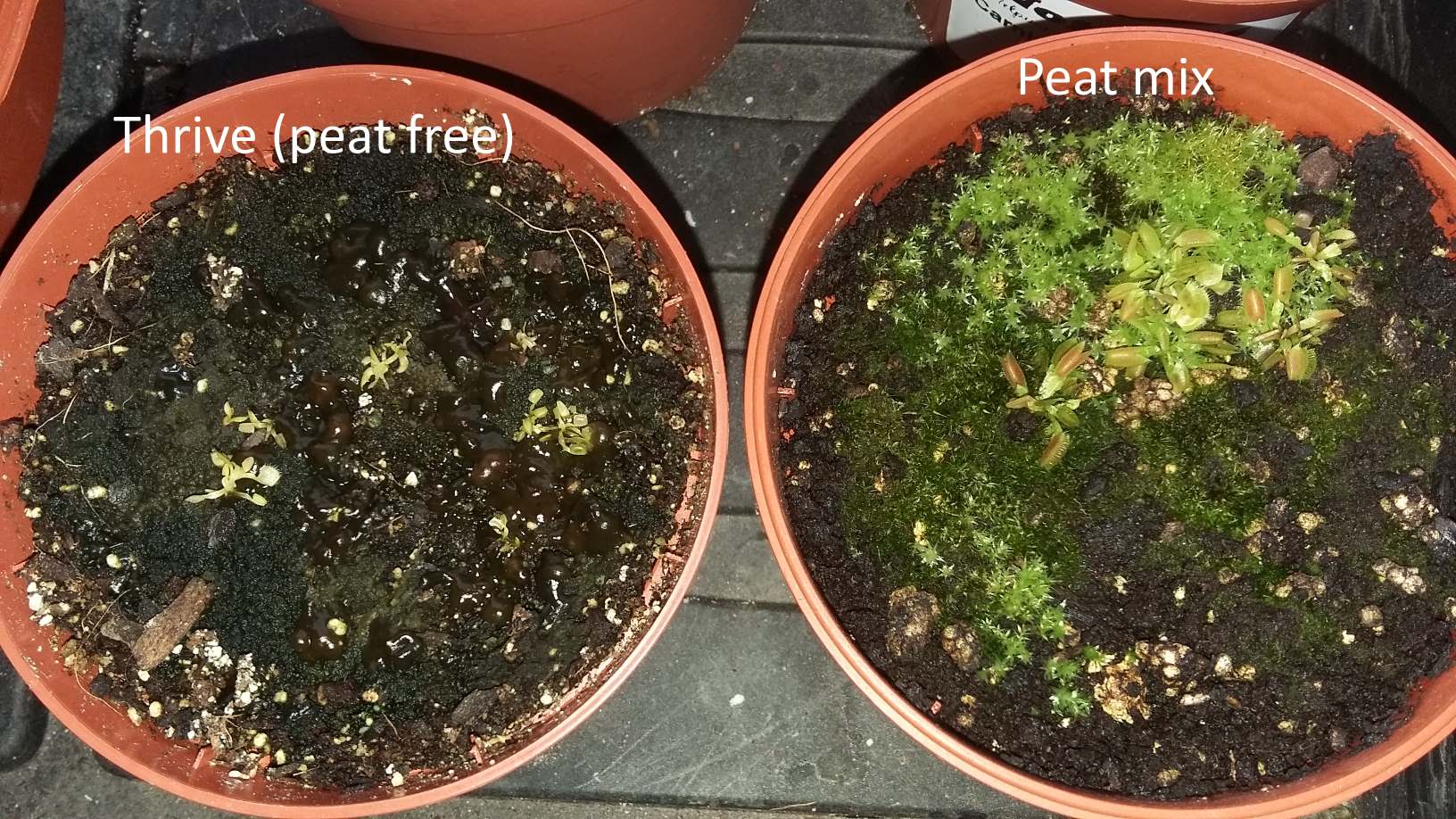 So overall: Thrive appears to work well for plants, but so far it's not looking great for seeds. Perhaps, as adult plants appear to grow well in it, that they're slow to get going but once they get to a certain size they'll kick into a higher gear. We'll have to wait and see.

I'm quite curious as to why the seedlings are struggling. It's easy to just say "well, it's not peat", but the whole point of peat is that it's nutrient poor, so it feels unsatisfactory to say that the seedlings rely on some special component of peat which is hard to find elsewhere. I wondered if it might have something to do with moisture or heat retention properties, but that's just idle speculation due to the fact the pot size seems to make a difference.

The question of what exactly Thrive is eludes me. I haven't been able to find out online. It looks to be about 50% perlite, which isn't too interesting, and also appears to contain bark chippings, but what the actual meat of it is, I don't know and I'd be very interested to find out.

Since writing this, some flower stalk cuttings in a small pot of Thrive have started putting up some small traps (after many months of doing nothing), and they are looking quite healthy, but the largest one only has five tiny traps so far. I'm tempted to transplant one into peat.