The first thing I'm going to say about BioShock 2 is that it's encumbered with "Games for Windows Live", and due to this, my steam copy was unplayable until I downloaded a third party DLL to disable GFWL, which was just giving me unhelpful error messages. Maybe I was unlucky and for everyone else it works fine, but a quick glance at the Steam forums suggests not. 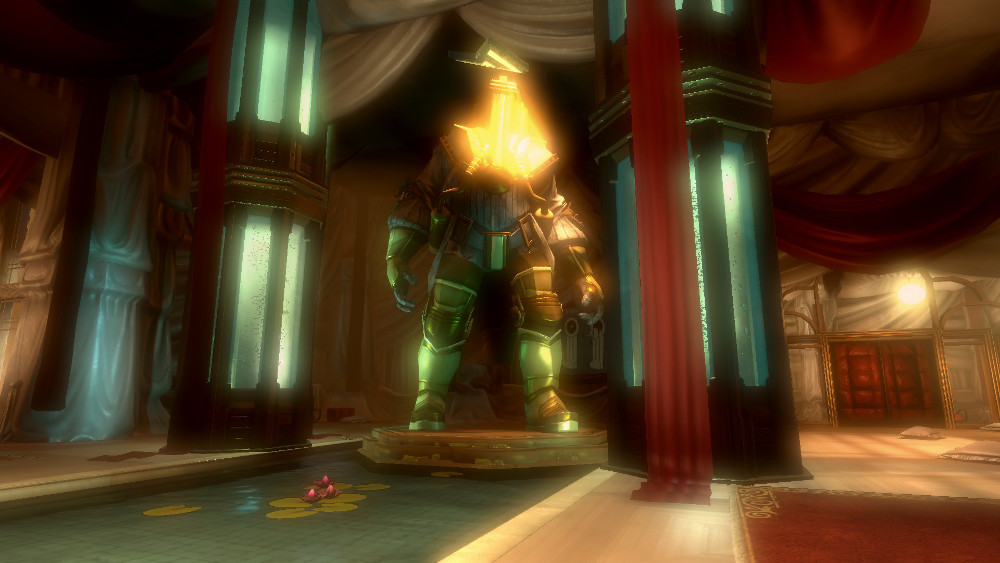 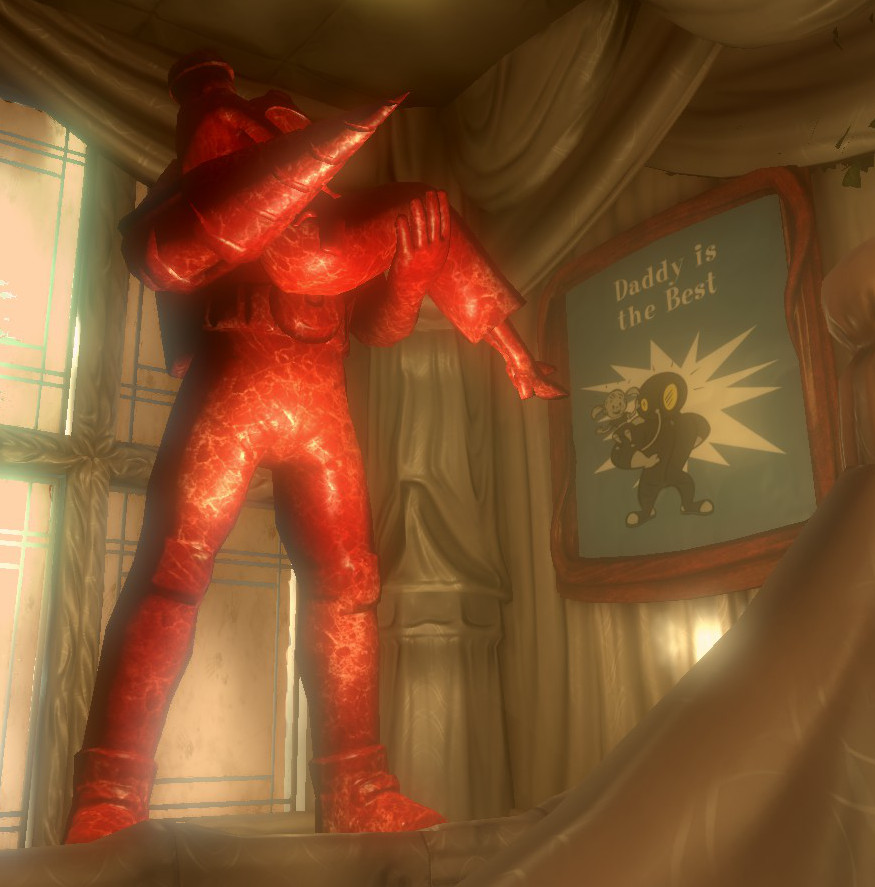 You [minor spoilers] play as a Big Daddy called Subject Delta. Your little sister is Eleanor Lamb, who just so happens to be the daughter of Sofia Lamb, who filled the power gap left by Andrew Ryan. Ryan was something of a literary masterpiece, which makes it doubly unusual for him to be encountered in a game. Sofia Lamb has turned Ryan's libertarian dystopia into something that's equal parts strange communist religion and insect hive. She has done this roughly in the same way Ryan built the place originally; she appeals to the shortcomings of their daily lives with a huge overhaul which turns out to better two ways and worse in about a million. She goes a bit crazy in search of her ultimate selfless utopia, and decides that (other people's) consciousness and desires are overrated.

The problem with sequels is that it's hard for them to live up to the original, regardless of how good they are. Especially when there's nothing in the original that really demands a follow up story. And this is the case with BioShock 2. Sofia Lamb is a strong character, but she can't live up to Andrew Ryan. It's unfair to dismiss her on that basis, because she's still 10 times better written than most game and indeed film and book characters. Her voice acting is also superb, with her presented as a fiercely intelligent woman who believes resolutely in what she's doing, for whom the ends justify the means. She is strangely charismatic, but not in a glossy political way. She wants to make the world a better place. She's thoroughly insane, but not a cartoon villain. But Andrew Ryan was all of that too, she's just a communist. 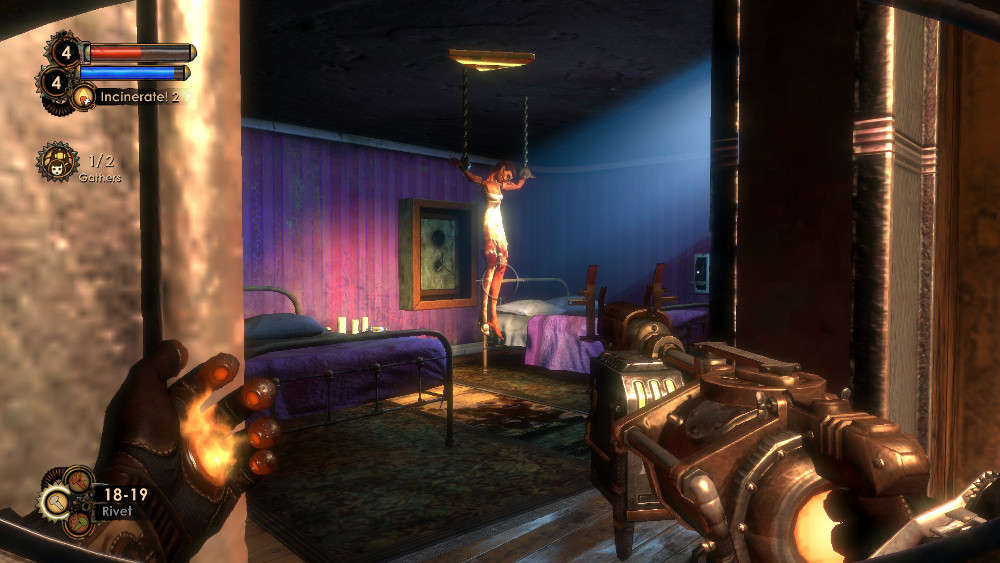 That's not to say all the writing is great, it is occasionally undermined by bits that make you say "uhh, what?", but most of it's solid. Ryan hasn't completely disappeared - he's still present through his audio diaries, but you get a much more 'personal' side of him. Behind the propaganda, he's depicted as a man becoming more and more weary as things go wrong around him. Sofia Lamb's existence being one such thing.

The core experience is largely unchanged. Atlas has been replaced with someone called Sinclair, who gives you helpful hints via the radio. Sinclair is a great character; unlike Atlas, it's pretty clear he's not entirely honest, but there's something likeable about him anyway. You originally hook up with him via our old friend Dr Tenenbaum, but then Tenenbaum seems to disappear off the grid, which is a bit of a missed opportunity.

In terms of game-play there are a few changes. Our stock early guns still get partly obsoleted by opponents' unlikely ability to absorb bullets more effectively as the game goes on, but on the other hand, we get an uber-powerful speargun which provides us with hilarious weightless rag-doll physics. The plasmid/weapon system has been streamlined so you can use both at once, but this means switching plasmids is a pain, because your mousewheel only switches weapons. This might be for the best, with the right plasmid selection you do become ridiculously powerful. Hint: if you get Insect Swarm and Summon Turret, you might never have to fire another bullet (spear) again... 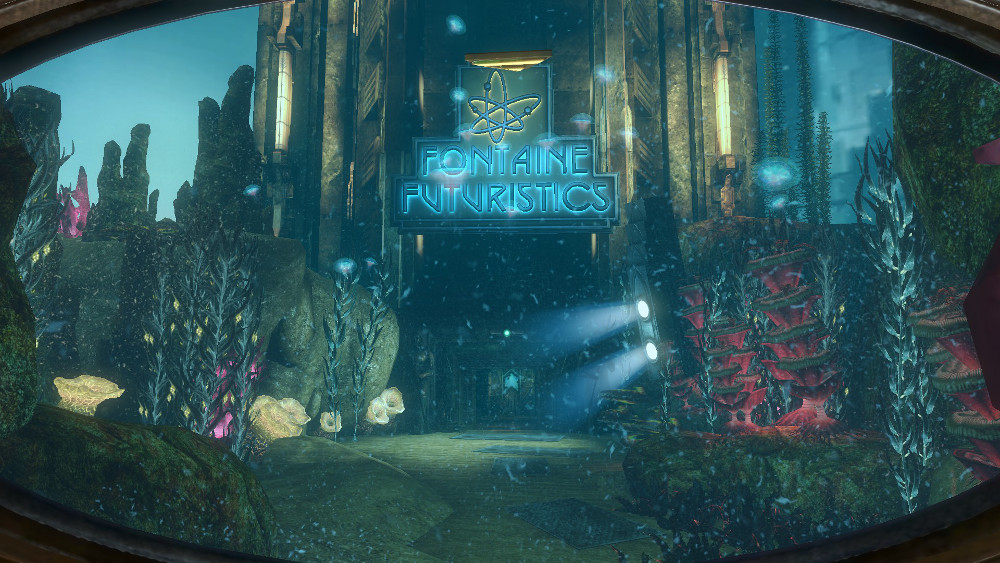 The game's conclusion and morality dimension is played out much better in BioShock 2. One of my problems with 1 was that there were basically only two endings, and although I spent three quarters of the game being 'nice', I still got told I was more-evil-than-Satan, which just didn't gel at all. BioShock 2 handles the ending better, and gives the player more varied opportunities to affect it. Although there are changes of pace, unlike the first game, BioShock 2 keeps it together all the way through.