BioShock is a pretty weird game. I'm massively out of date because I'm talking about the first one. I've never played it before; I had some technical issues with it previously, and I've only just got around to it. I had another go, and after getting sound to work, (bizarrely by plugging in a microphone,) I don't regret it. 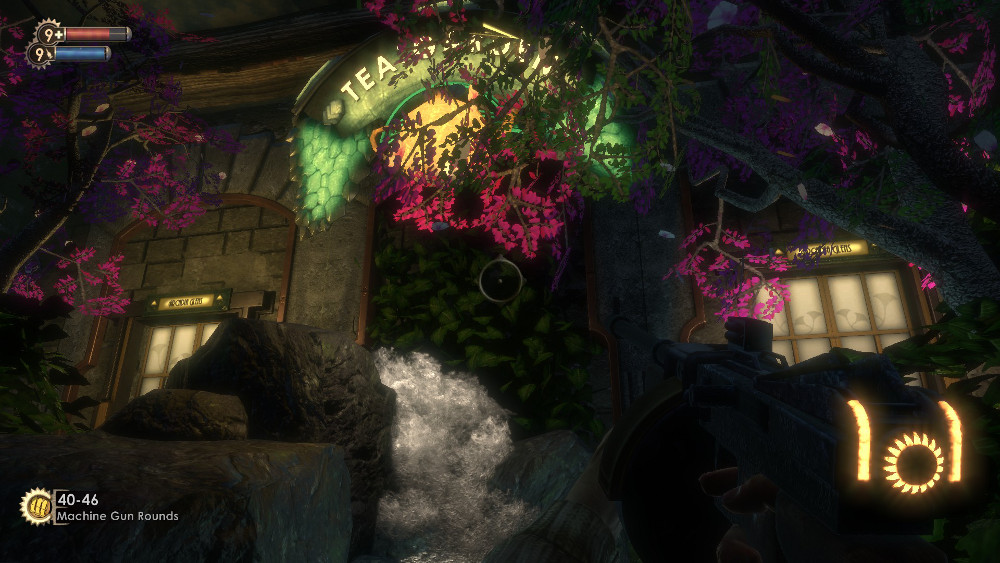 You are [someone], you find yourself in a strange underwater city called Rapture, and in general FPS fashion, some Irish guy called Atlas starts talking to you on a radio and decides you should save his family for him since he's useless and depends on the help of random strangers. He introduces you to Rapture and points out the crazy drug induced psychopaths who want to kill you, then advises you get drugged up yourself because it gives you superpowers. Your character happily obliges by dramatically plunging needle after needle into his arm with no apparent regard for the fragility or cleanliness of the average hypodermic needle that you might find lying around a ruined city. And as luck would have it, it's impossible to not follow Atlas's quest because all the other doors are locked. 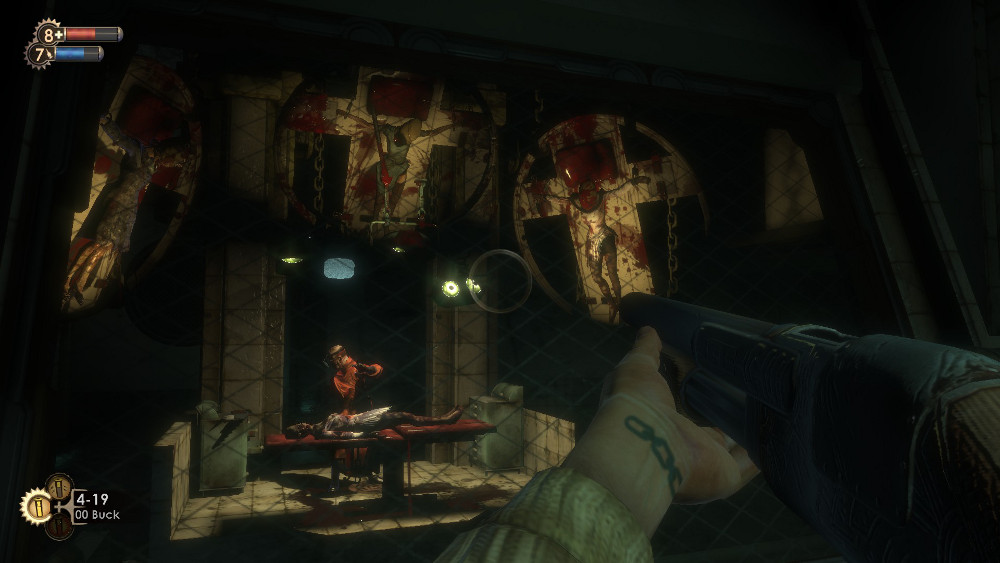 Despite the lazy setup it's quite engaging. Rapture is wonderfully developed; it's a city founded by a man called Andrew Ryan (the partial anagram of Ayn Rand is probably not coincidental...), an extreme right wing libertarian type who wants to get away from pesky government regulations and run a truly free-market capitalist utopia. Rapture is founded on the principle that a man should be entitled to monetise the sweat of his brow, his own property, and indeed the city's oxygen supply.

Unsurprisingly for a community founded on personal greed, it goes bad and things end up in a bit of a mess. The game's back story is fed to you by Atlas and through the perspective of other characters via audio diaries they helpfully leave around, incriminating themselves in all sorts of things. It's rare to play an FPS, no scratch that, a game, with such a well delivered and intriguing plot. It's also rare to play a plot-heavy game which manages to convey its story without breaking the player from the game with cutscenes.

The core gameplay itself is fairly standard FPS stuff with a hint of RPG. You wander around fairly non-linear trying to satisfy fairly linear goals while picking up ammo and supplies that have been helpfully scattered around for a maruadering invader like yourself to pick up and utilise against Rapture. You also get drug induced super powers. 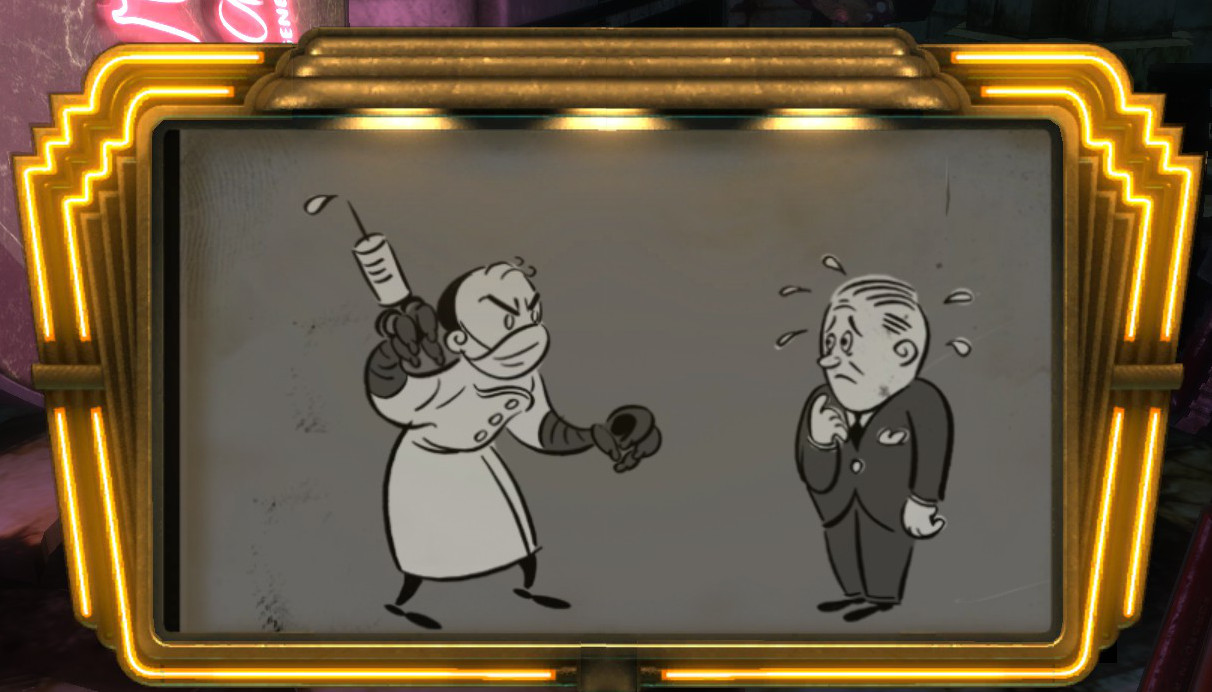 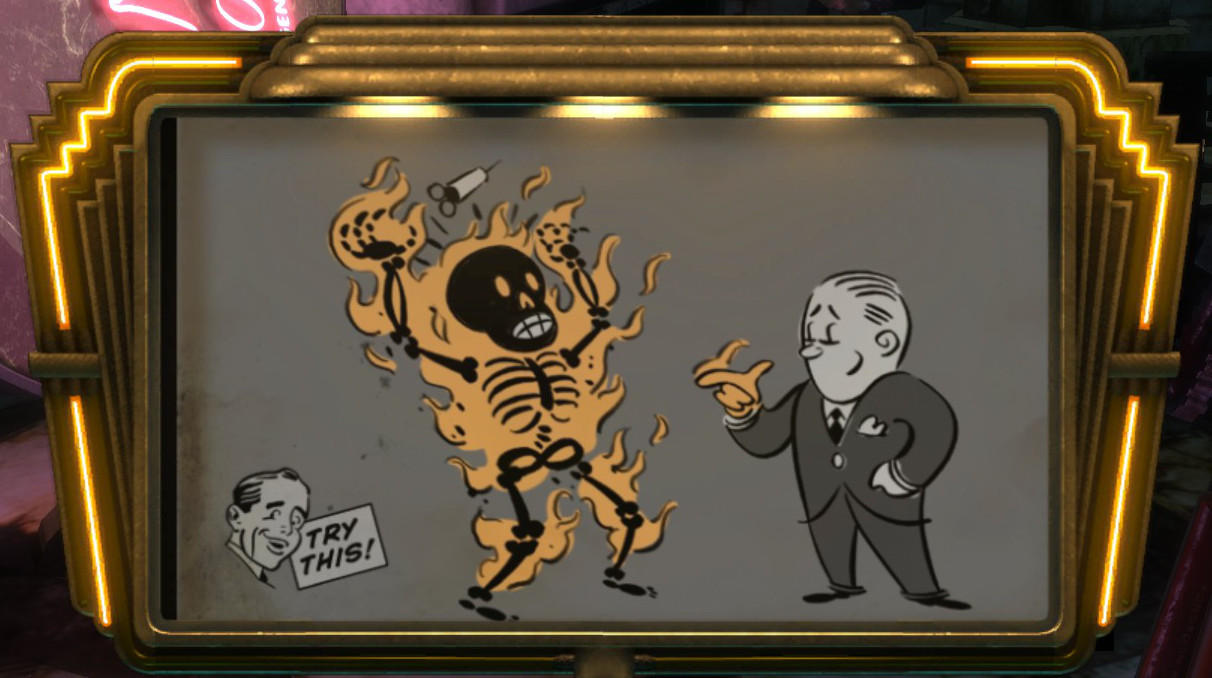 The combat itself is a bit clunky and a bit fast, it plays too much like a Quake 3 deathmatch to pretend it has any real tactics behind it, but on the other hand, ammo is in fairly short supply so you do have to be a bit careful. The exciting part of the game is upgrading your superpowers which you do by harvesting something called ADAM, which seems to involve murdering small children. Supposedly this presents a moral quandary for the player; you can either rescue the small girls and receive less ADAM or kill them and receive full ADAM. The little girls, however, aren't really little girls, but are instead strange monsters cultivated inside small girls by a nutcase German (of course) scientist, and they're rather creepy. Quandary averted.

Like most games that start off so well, BioShock does go downhill a bit towards the end. To increase the difficulty, it does the standard lazy FPS thing of making enemies soak up damage more readily. It just seems a bit ridiculous to unload a full Thompson clip in someone's face for them to go "Ha ha ha!" at you. Then there's an escort mission. Then there's a multi-stage boss fight, i.e. you kill him. And then you kill him again. And then you kill him again. This is lazy and frustrating. Aren't we past this yet? And for some reason the final boss more closely resembles Darth Sion (sleeps-with-vibroblades) from Knights Of The Old Republic than anything you've seen up to this point.

The story strays too far into cliched cartoon baddies who put on a cliched evil voice when they talk to you. The masterfully created Andrew Ryan, who was essentially a naive and deluded person trying to make the world a better place, gives way to a standard evil bad guy trying to make the world a worse place. This is what we call "Star Wars morality", and it works quite well when we're 9 years old but less well thereafter.

The ending, unless you were either lawful good or chaotic evil, makes absolutely no sense and is a bit of a letdown. Again, the binary good/evil state is at odds with Ryan. Especially considering how hard I worked on the escort mission to keep my companion alive in the face of zombie bullet sponges.

In any case, for most of the game, BioShock's gameplay is solid and its world and setting are very strong. Its world is most obviously comparable to that of the Fallout universe, partly because depending on your point of view it either nods towards or directly plagiarises it, but also because it's a solid atmosphere with a strong retro art direction.

Most games struggle to forge their own style. BioShock doesn't.

Probably 8/10. The 2 points knocked off for the story degradation towards the end, the fact the game overuses darkness for "atmosphere", which gets annoying after a while (and makes screenshots look rubbish), and how annoying it can be to switch between weapons/plasmids/ammo in fights.