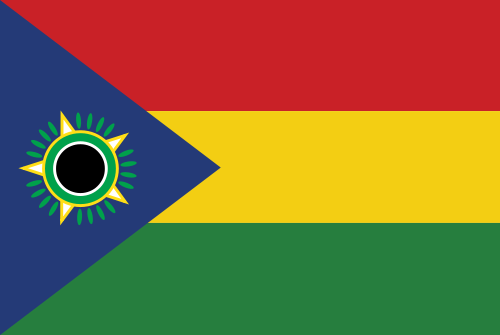 With the recent SimCity debacle, and Valve's not so subtle decision to put Tropico 4 on sale for a week, you might be wondering if Tropico is any good. It looks fairly good, but it doesn't seem to have the marketing that AAA titles do, so maybe it's rubbish, yes?

The answer is a resounding no. Tropico is great. All your suspicions demonstrate is how vulnerable you are to exploitation by marketers in an industry saturated with misleading advertising. Which, ironically enough, is a property that would make El Presidente value you as an co-inhabitant of his little spot of paradise.

Tropico is a real gem of a game. 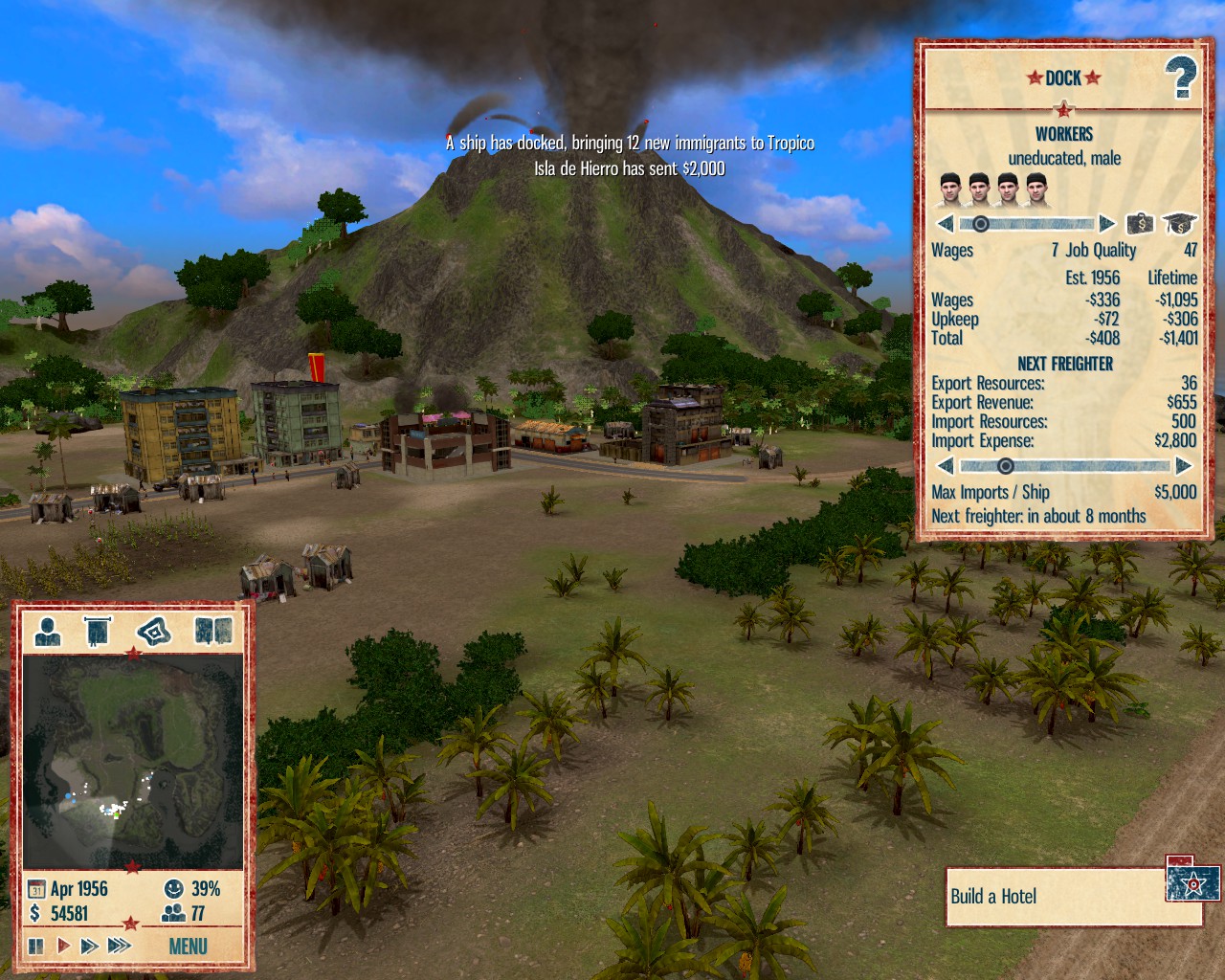 Tropico has character. Not just your character, El Presidente, a strangely lovable Banana Republic dictator, the magnitude of whose ambitions are matched only by the magnitude of his facial hair. No. There are many other characters too. Like Penultimo - your hapless second in command, Sunny Flowers - the resident hippy radio host, and Antonio Lopez - a man so serious about capitalism that he made extra space under his chart to show you how quickly the markets were collapsing.

But that's not really what I meant by character...

It's not really a sandbox city simulator, although town planning certainly plays a big part, it's much more a story driven game. The plot unfolds throughout each mission in comically ridiculous ways with comically ridiculous racially stereotyped characters with silly accents. "El Presidente, the mighty Chinese dragon is hungry for your goods". It's all very very tongue in cheek and adds a wholly different and entertaining view onto a solid management game. And the well made and fairly long story campaign adds much more focus over a more sandbox oriented game. 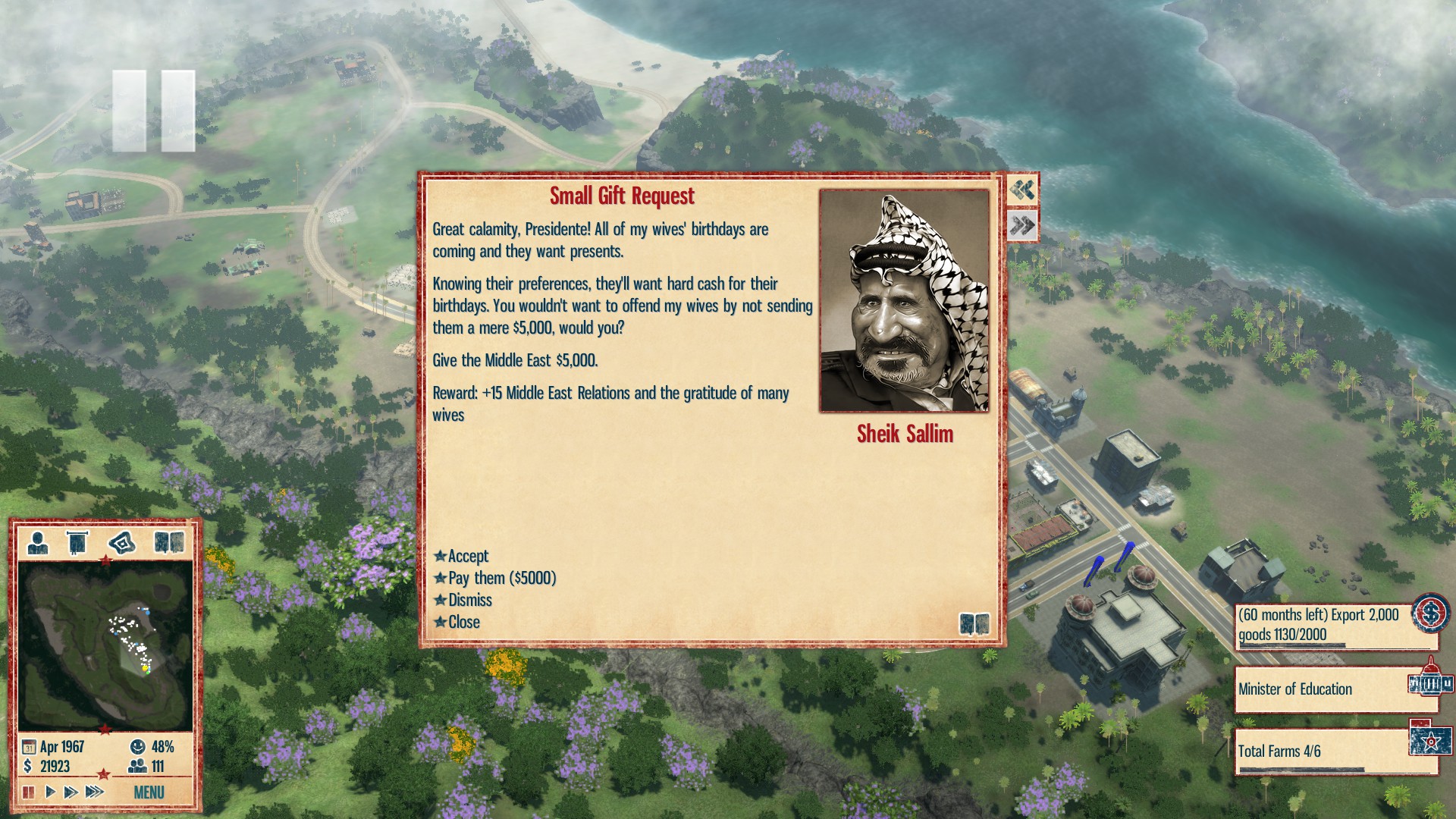 It's rare that I'm entirely positive about a game, but there's not a lot you can criticise Tropcio for; it's well made, it's stable, it's original, and it's really enjoyable. Oh yes, and the music is top notch.

Possible downsides are that it's a bit complicated to start off with (although the campaign eases you in, if you pay attention, and there are tutorials, and a PDF manual on Steam).You also need a (free) Kalypso account, but once done it's unintrusive and there's no additional DRM beyond Steam.

To put it in perspective, I bought Tropico 4 in a Steam sale over the summer, and 9 months later I still boot it up sometimes. Now that all the DLC are on sale too, I've bought them also. You get a lot of value for money with Tropico. As an extra bonus, it's graphically unintensive while not being ugly, and should therefore run on most non-ancient PCs.

By the way, if you missed the Steam sale and don't want to pay full price, wait a bit. It seems to go on sale every few months.