PlanetSide 2 is an MMOFPS (you know what that means). I'm lucky enough to be part of the beta test. It releases in a few weeks (20th November). 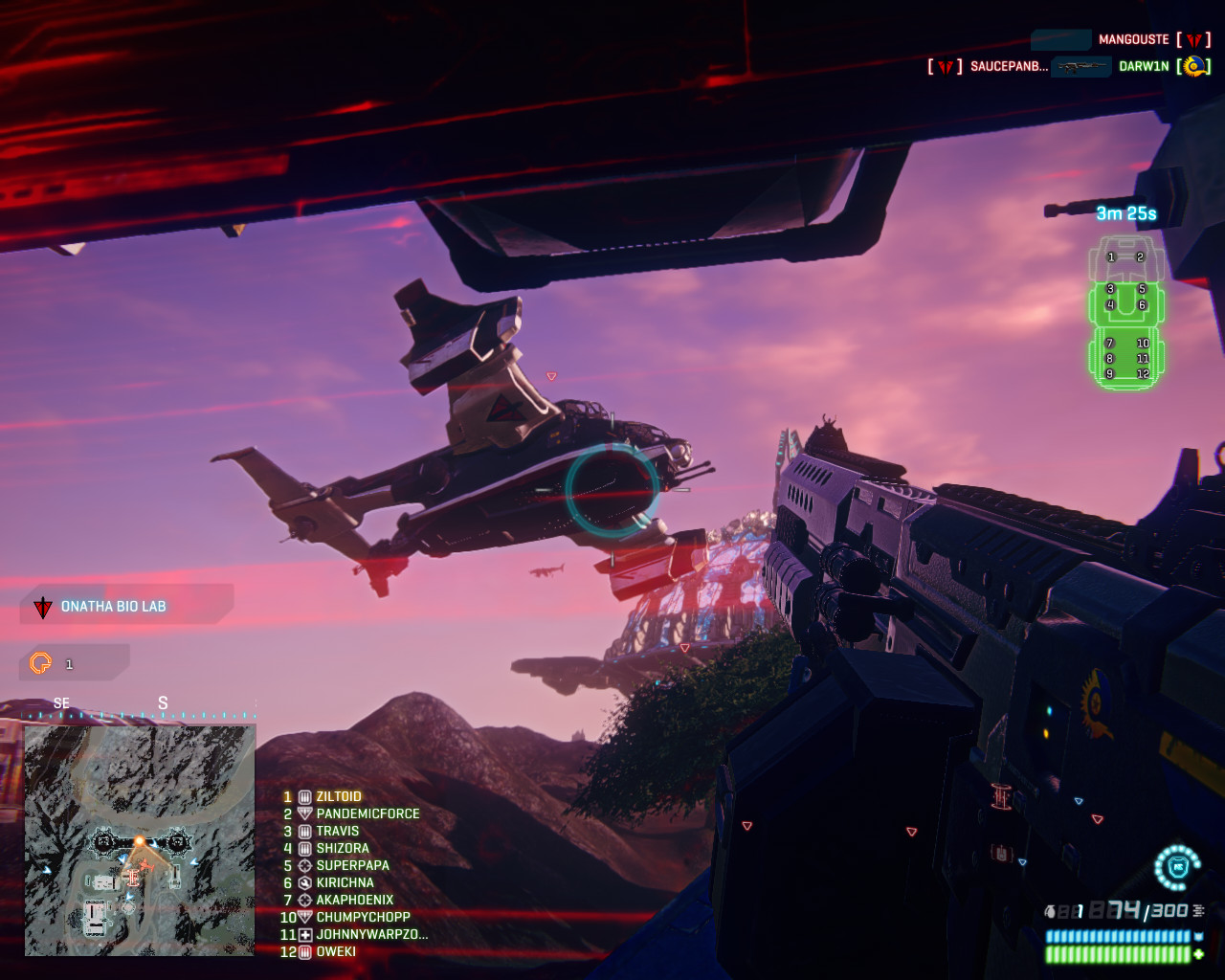 I've been playing PlanetSide 2 for the last week or so. I've never actually played an MMOFPS, and off the top of my head, I couldn't name any others except for PlanetSide 1.

I vaguely remember a fair bit of buzz within the Tribes 2 community for PS1 (because they were both relatively unique in that they implemented big, open rolling terrain in an FPS, but I suspect that's where the parallels ended), but I never got around to checking it out. History repeats, and there's a fair bit of buzz in the Tribes: Ascend community for PS2. But my impressions are that it has little in common with Tribes, and is in fact strikingly similar to Operation Flashpoint (the original 2001 version, not the rubbish sequel). Because: 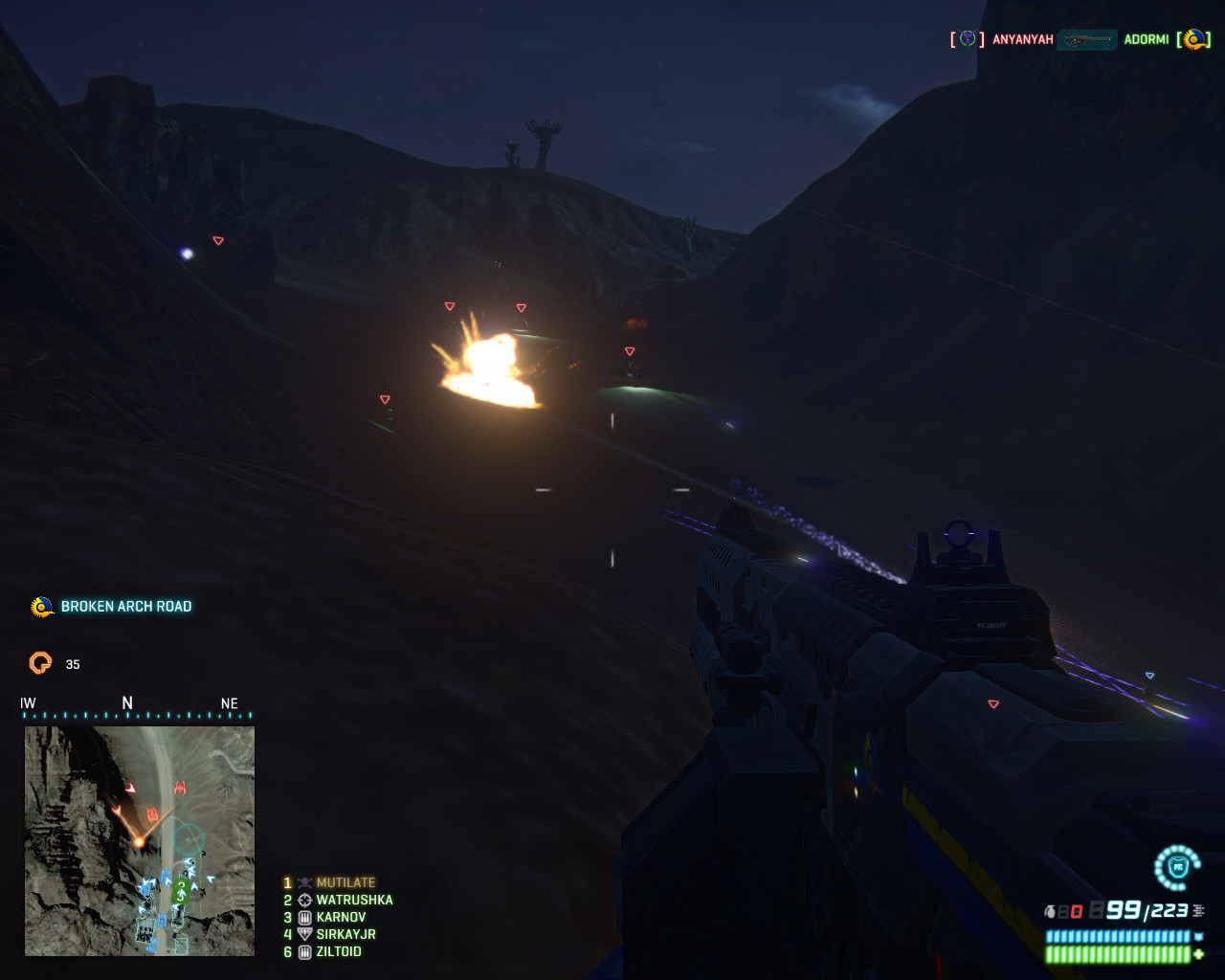 That about sums up both OpFlash and PlanetSide 2. Sort of. They are both "combat on an epic scale", and it turns out that 'combat' in such context is synonymous with 'confusion'. PS2 is bewildering. That's really the biggest thing you'll take away from it. OpFlash was bewildering too; it was a realistic portrayal of warfare inasmuch as any game can be a realistic portrayal of warfare. You could easily spend 20 minutes lying on a hill because you were too terrified to do anything else (missions were long and the save feature was stringent). Combat was often a few loud bangs followed by a black screen, as indeed is PS2's.

But Flashpoint was single player and back in 2001, the technology for such an environment wasn't exactly widespread. To a certain extent, the helplessness and the irrelevance it thrust upon you was a very convincing illusion, and given time, you could learn to game its limitations. PS2 appears to be much more genuine in this respect, and I'm not sure that's necessarily a good thing, as it is basically an exercise in frustration. 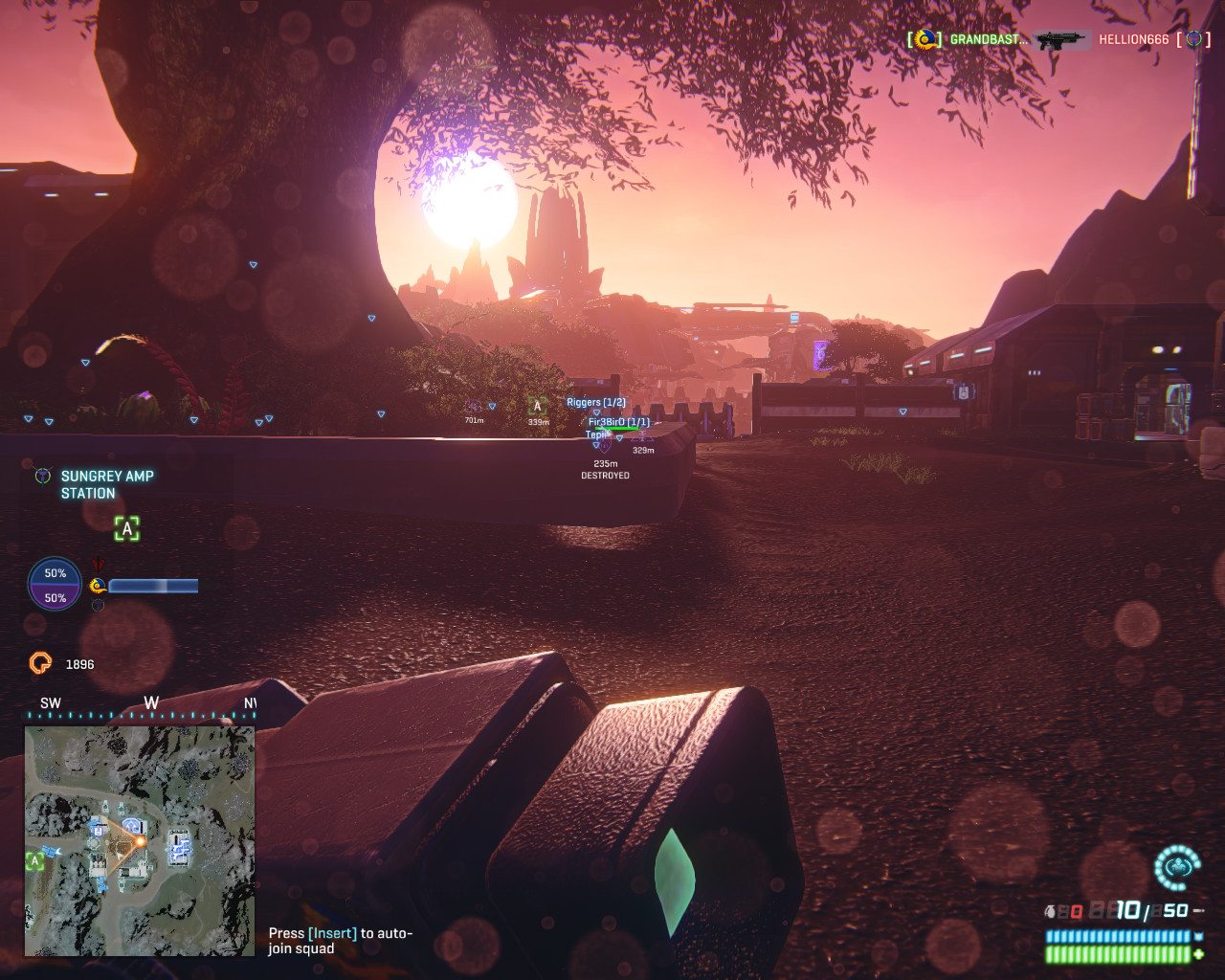 But it is fun. There are genuinely engaging experiences when at night you're cowering behind a rock shooting hapless foes who appear on the horizon. You're positioned well, you're part of a squad, and your superior tactics win the day. The scale makes it even more exciting. But then there's the flipside: You travel across the world uneventfully until suddenly you find you're getting shot by people who are well positioned and well organised, and you're lucky if you even figure out where they are before you get killed. Then you respawn back somewhere totally undesirable and have to make the trek again before you can again be part of the action. This is a frustrating experience. 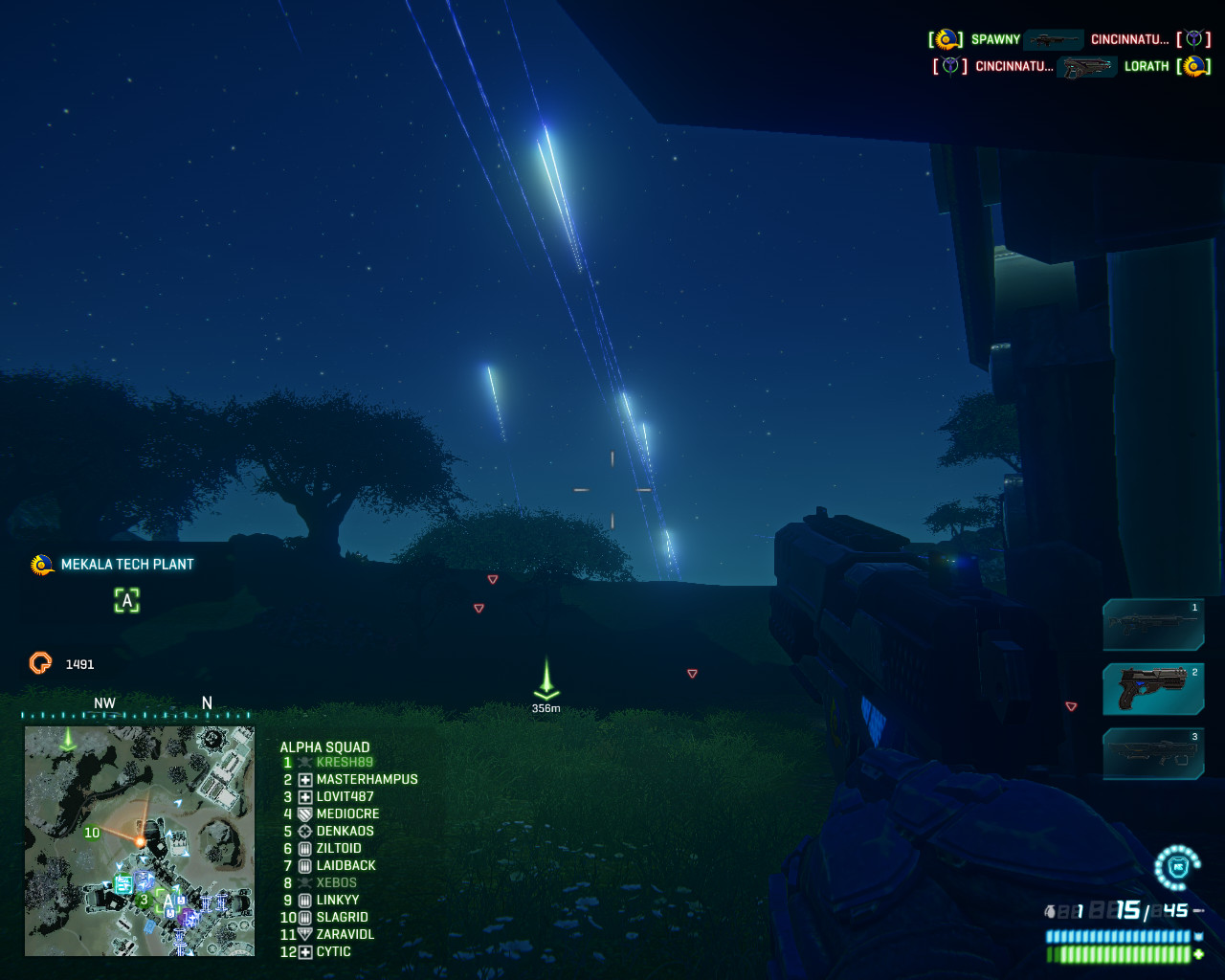 PlanetSide isn't helped by its complete lack of explanation of virtually everything. You spend a lot of time running around following other people, hoping they have more idea than you. You will likely spend your first half hour in the game wandering around empty terrain wondering where all the excitement is. Perhaps PS1 veterans will understand what's going on, but most people certainly won't. Even the mechanics of capturing locations are unclear.

Luckily, there is in-game voice chat and most of the players using it are quite helpful in directing their team-mates. Players are organised into squads (12 people) and platoons (4 squads) with a leadership hierarchy. If you end up in an organised squad/platoon, the game is *incredible*. You bounce along the terrain in an APC with your squad-mates while your squad leader tells everyone to hold fire to keep your position unknown to the enemy, then a hostile aircraft notices you and your squad leader announces "weapons free", as just a moment later both turrets spring into anti-aircraft action. It really is an amazing form of gaming. And the beauty is that the voice chat is in-game, so regardless of whether you actively partake (or even have a microphone), you can still benefit from it passively without having to worry about third party software and servers.

It is beautiful, too. The lighting effects are lovely. The night time battles are wonderful; the skies and hills light up vibrantly with fleeting flashes, explosions, rocket trails, AA fire and muzzle flashes in a way screenshots just can't capture. This isn't just cosmetic: muzzle flashes have tactical implications. Some weapons even have add-ons that promise to reduce muzzle flash. And night is very dark. You have to stay alert. You can easily end up a few feet away from an enemy before either of you realises the other is there.

PlanetSide 2 will be released officially in less than two weeks (20th November), but unfortunately, in its current state, while the game is interesting and has huge potential, the experience is just too hostile to new players. For a game designed for huge numbers of people, launching in such a state as to give a poor first impression will irreversibly harm its lifespan. It *needs* players more than any other FPS. Tens of empty square miles of terrain is of no interest to anyone; you need hundreds of players online at once to populate it. Hi-Rez Studios made the same mistake with Tribes: Ascend in that they pushed it out to the masses before they'd polished the new user experience sufficiently (and then repeated the mistake with the Steam release), and now, 9 months after release, the playerbase is worryingly low because it failed to hold on to players. T:A can just about sustain itself for now, but PS2 is fundamentally reliant on a large, active playerbase. 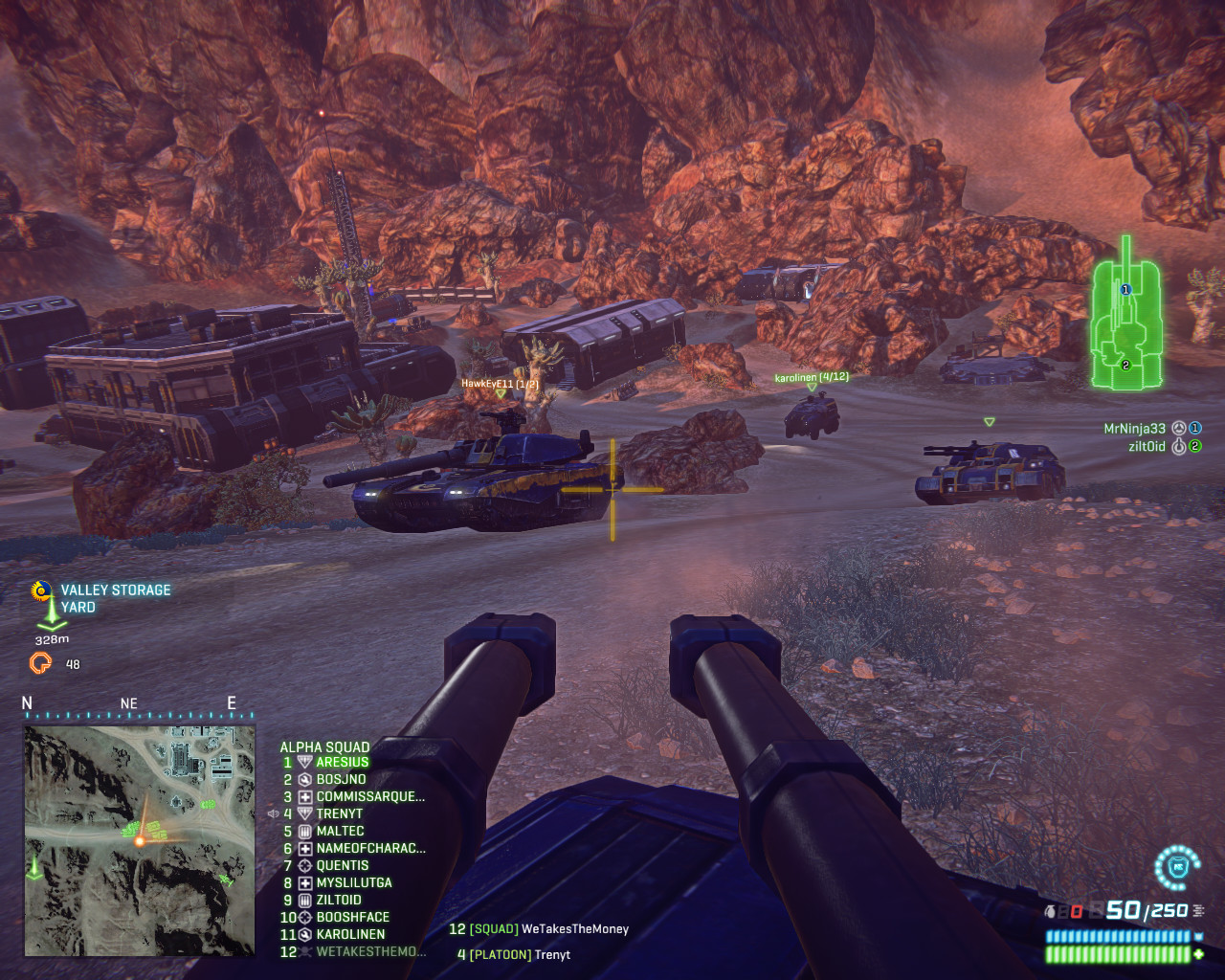 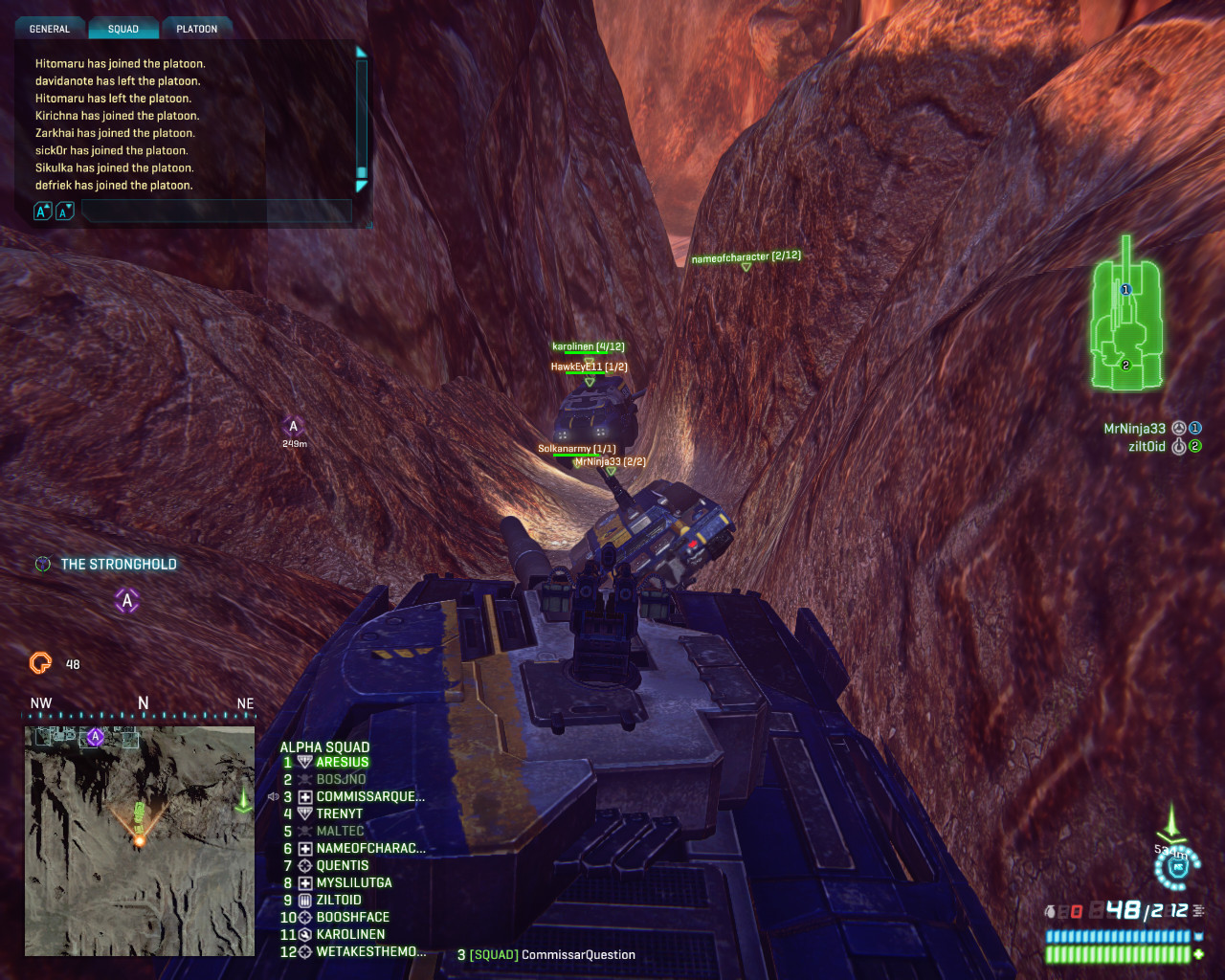 The game is also a bit buggy and not entirely professionally run (it is Sony after all). This close to release, bugs like your tank falling through the terrain shouldn't really happen. And maintenance shouldn't take down the game at European prime time two consecutive nights. There seem to have been a lot of failed patches and rollbacks recently, too, which doesn't inspire confidence.

It's ironic that many Tribes: Ascend players were pining for PS2 as a saviour, but PS2 seems to be falling into exactly the same trap of releasing far too early and making the wrong impression.

Here's a concrete example about how badly Sony is handing the software and support side of the game. This morning (11/11, a Sunday) Sony pushed out a 3GB patch, and took the servers down for a few hours. When the servers came back up, players found that they had lost certs (certifications - things you earn and can spend on upgrades of various kinds). So this afternoon, they took the server down again for almost three hours to fix the missing certs. And they're talking about patches to fix crashes (which I think were introduced this morning...), which will no doubt mean more downtime. I know it's a beta, but it's now very close to release and we are seeing large amounts of downtime because they don't test their patches before deploying them.

This is the third day in the last 7 that I've attempted to play at a perfectly reasonable time and found the servers have been down.

Sony Online Entertainment is not a company that is good at this stuff.