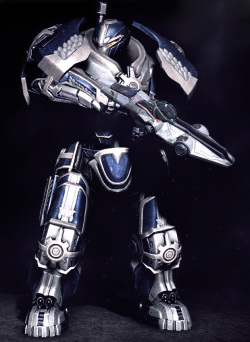 It's the eternal conundrum. Juggernauts blow things up, Doombringers stand on flags, but what on earth are Brutes meant to do? Fractal dispenser, obviously. But nobody gets caught in fractal fields any more and now people have cottoned on to the fact that indoor play isn't very important, they're even less effective.

Well, it turns out you can make Brute a pretty effective flag-defence/HoF class. Is it as effective as DMB? I'm not sure; it's more of a high-risk high-reward thing, but it's far more fun.

Let's quickly summarise the reasons for the choices above. The devastator spinfusor does a huge amount of damage on direct hits and is good for one-shotting incoming lights or quickly finishing anyone trying to duel you. The Colt is accurate and effective at picking off (or at least damaging) flag cappers who get through.

Stickies are just fun. You could use fractals if you want, but they seem to be most effective at denying you access to your own flagstand, which is the opposite of what we're trying to achieve here. And getting a sticky on a capper as he shoots past with your flag is hilarious.

Super heavy is for squashing cappers as they fly into you (obviously), but you could argue that a capper with a brute in his way is not a capper likely to do anything useful anyway (in the chaos of pubs though, this doesn't really hold true), so you could swap this out for survivalist. 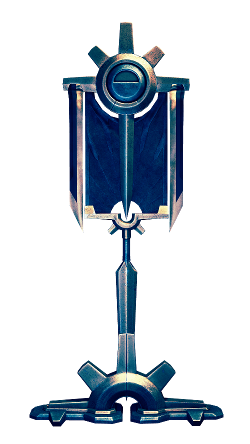 Your basic tactic is this:

Because of the nature of capping, if a capper wants to come in fast, they have to head in a roughly straight line in the half-second before they grab. If you're on the flag, you have the absolute perfect opportunity to put a disc in their face. Struggling with blue plate specials? Here's a great time to practise. And because your spinfusor does a ridiculous amout of damage, you'll probably kill them in one shot.

Some cappers can swerve quite effectively, but ultimately they still have to go through the flag (or close to it) and you've still got a chance of body-blocking them if you miss. And don't forget you can move. Jetting at this point sacrifices a lot of control (but can make lining up a BPS easier), so generally you should stick to strafing.

But he's getting away!

You're not going to stop all cappers. When one gets through, whip out your Nova Colt and unload it in his direction. You're not a chasing class, so don't think about following him. Many games are lost because a flag is returned when the defence isn't at home, leaving the stand open for a few seconds. As a HoF you should always be in defensible range of the stand (except when you're dead. Try not to be dead very often).

But I'm getting blown up all the time...

HoFs attract spam. Which is why in many games, you simply won't be able to just casually reside on the flag. But you shouldn't leave the stand unless it's absolutely necessary (for example to avoid a wide-spread MIRV, or to resupply). You only need to be on the flag right as a capper is coming through.

As well as spam, you'll start attracting INFs, and even worse, they might work in tandem with cappers! Sandrakers can be smart like that. The good news is that if they do start operating like this, you've got a nice early-warning system on incoming cappers. The key is to stay alive and alert long enough to stop the capper without letting the INF distract you too much.

The hardest part is observation: cappers can sometimes come out of nowhere, and a capper with Reach doesn't have to go through you. Counter intuitively, these kinds of cappers are best countered by not being *on* the flag all the time. For example, Katabatic has a few back-to-front routes that are almost invisible to a HoF, and the visibility on Arx is clearly low if you don't move from the flag. On Kata, it makes more sense to wander around the stand from corner to corner. On Arx, it can help to get on top of a roof to look out for cappers then drop down when one approaches.

It's easy to get distracted by people trying to duel you or mortar spam or infiltrators. It's fine to engage in duels and general defence, but don't move far away from the flag. Definitely don't go after people heading into your base; it's not your problem. The beauty of a Brute HoF is that you're equally effective with or without the generator.

If you do get sucked into duels, make sure that between each spinfusor reload, you're looking around for potential incoming cappers. You'll still get caught out, but conversely, you're no use dead, which is how you'll end up if you don't defend yourself.