It's sad to see Anette Olzon leave Nightwish. I say this as someone who thinks Nightwish peaked at Oceanborn, wobbled at Once then floundered from there onwards. Although this coincides with Tarja's departure and Anette's arrival, I don't think Nightwish's problem is their singer, and a lot of unfair criticism has been levelled at Anette for no better reason than she's not Tarja. The real problem is the Jack Sparrow lookalike on the keyboards.

It's Tuomas's band and he can do what he wants. Fair enough. But as his composition and musical awareness soars, the quality musical output of the band plummets. He's fallen into the standard trap of not realising that making music more ambitious in terms of the number of instruments in the composition doesn't make it better, and his apparent obsession with film scores makes this worse. Film scores fulfil a very different role than standalone music, and even so, overblown composition is a modern trend in film scores; Ennio Morricone's "Fistful of dollars" is basically a guy whistling. Film scores are usually big, epic and colourful. But they must also be safe, cautious and conservatively inoffensive, and it is harder to create good art within those constraints. The constraints of commercialisation. 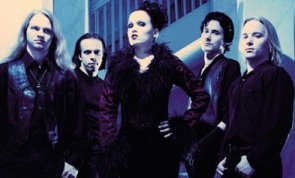 Besides, early Nightwish albums were ambitious, they created rich soundscapes with few instruments and a tasteful sparsity across the frequency range. Newer Nightwish albums are heavily orchestral and hit you over the head with vast arrays of sonic frequencies at every possible opportunity. There is no 'tasteful' here. And as a result, nothing really stands out any more. Bizarrely, although the music's trying to head in the opposite direction, some of the lyrics are regressing into teenage angst. "Bye bye beautiful", "I want my tears back", "For the heart I once had", what is this, post-emo? It's getting embarrassing.

In previous albums the main focus was usually Tarja's soprano voice. For those of you who argue that Nightwish's quality dip is due to Tarja's departure and their failure to replace her with another soprano, I contend that you should listen to Ghost Love Score from Once, which is one of the few tracks from that album where she actually showcases her vocal range, where she's clearly struggling to stay relevant against an increasingly overblown backdrop. Tuomas had already evolved the band away from the operatic style before Tarja left.

I don't think it matters who Nightwish's new singer turns out to be, as it doesn't seem like the singer is an important part of the band any more. Same for any other individual member, save for Tuomas. Floor Jansen is currently filling in for them; it would be a shame if this turns out to be a permanent arrangement as Floor is very talented and doesn't deserve to have her voice assimilated.

Hi dude, found your blog via your Ocean Machine review (awesome btw). Anyway, I also think Nightwish peaked at Oceanborn and agree with your comments on death by bombasticism. BUT: I think Ghost Love Score is one of the last great tracks they produced! Tarja's voice works really well with this piece, which given it's name, must've been written as an ending-credits piece(?).

I used to love Ghost Love Score, but the more I've listened to it, the less I've liked it, and I think it's entirely because the instrumentation feels 'softer' and less defined than previous albums - something like Stargazers (from Oceanborn) has a very tall symphonic feel to it, but the instruments have a hard edge to them too.

Thanks for the comment by the way! Grim Fandango fan?