Obligatory screenshot of dynamic random mode, not that a screenshot shows much: 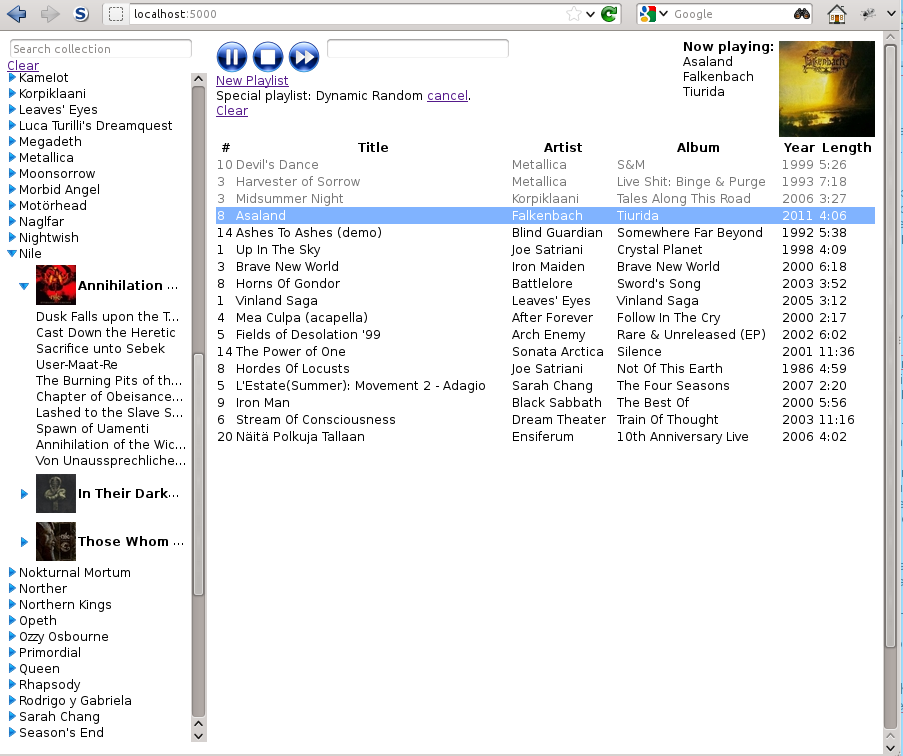 it's still a bit ugly.

Because I've switched it to SQLite, it's probably in a state that overly enthusiastic users could try it out, but you're on your own with setting that up for the moment (clue: you need Python and Flask installed, run python server.py and browse to localhost:5000. The path to your collection is hardcoded in server.py. You'll also need to create an SQlite DB: sqlite database.db. It should set up the schema automatically.).

There's a fairly major issue with respect to the actual serving of media files and how browsers interpret them. It seems like if they are served as contiguous data via a HTTP200 response, browsers can't seek in the files. Even more problematic, Chrome won't fire the 'onended' event, so we have to poll to try to figure out when a track has finished playing. This is really bad and far from bulletproof; we're relying on the meta-data being correct, which isn't always the case. It also means gapless playback is unobtainable currently.

This is technically a browser issue, but I think the files need to be served via HTTP 206 (partial content), but Flask doesn't support this, so at some stage (pending a test), support for HTTP 206 will probably need to be written into server.py.

There is a bug report, which agrees with me, but it hasn't had any attention.

Hi There. I came across the web site your online. A great article. Let me be sure to save that and also resume learn more of the information. Thank you for your publish. I willundoubtedly give back.

After about 9 months, you're the first spam bot to get past my filter, which has ruthlessly trampled thousands of your brave comrades' attempts. Congrats, I guess! Go team China!

Should probably get around to adding nofollow about now...